NIGERIA – ATTACKS BY FULANI TRIBESMAN ARE A FORGOTTEN AND OVERLOOKED TRAGEDY

NIGERIA – Attacks by Fulani tribesman are a forgotten and overlooked tragedy

Christians in northern Nigeria, in addition to suffering attacks by the terrorist Boko Haram group, are also facing a terrible situation as a result of the bloody attacks by Fulani herders against Christian villages in Nigeria’s so-called Middle Belt. 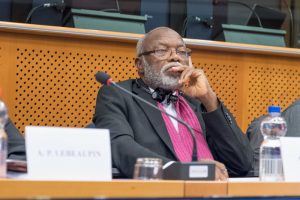 Presentation of the Religious Freedom Report at the European Parliament in Brussels on 04.12.2018
His Excellency Mgr William Avenya(Bishop of Gboko, Nigeria)

“This is a time bomb that threatens to ignite the whole region”, says Bishop William Amove Avenya of the diocese of Gboko. He was speaking to representatives of the international Catholic pastoral charity and pontifical foundation Aid to the Church in Need (ACN International). He described how in his diocese, located in Nigeria’s majority Christian Benue State, “Fulani tribesman, armed to the teeth, are murdering pregnant women and children and destroying our smallholdings”. Ever since 2010 the Christian villages have been the target of violent attacks by the nomadic, Muslim Fulani herdsman from the Sahel region, who have been armed with a wealth of modern weaponry. The result has been thousands killed and numerous communities forced to flee. “The Fulani have claimed far more victims during 2018 than Boko Haram, but no one is doing anything about it”, the bishop explained.

According to Bishop Avenya, the Nigerian authorities are simply not taking the necessary measures to address the violence. He denounced the silence of the government and of the media. During his visit to Europe to attend the official launch of ACN’s Report on Religious Freedom in the World, the bishop met with EU politicians from Brussels who likewise “seemed poorly informed about the situation in our country and about the threat posed by the Fulani, who have been supplied with modern weapons of a kind not used by simple herdsmen. We need to ask who is behind this.”

Already a month ago, Bishop Avenya had issued a desperate appeal to the international community, urging it “not to wait for a genocide to happen before intervening”. Additionally, on numerous occasions, the Nigerian bishops’ conference has called on the Nigerian President Muhammadu Buhari to provide effective guarantees for the safety of his people or, if he is unable to do so, to resign. Their petition has been ignored and the violence continues. Meanwhile, Muhammadu Buhari plans to stand once again for president in the new elections to be held in February next year.

“Meanwhile, the Church continues to try and heal the wounds”, Bishop Avenya added. “We have not lost hope, but we do need help.”