“DO NOT BE A SILENT BYSTANDER TO OUR DRAMA”- IRAQI CHRISTIANS

Iraq: Christian leaders call for more support for the Christians of Nineveh

“Please do not be a silent bystander to our drama. We call on you to support the Christians of Iraq… while there is still time.” This was the urgent appeal underlying the joint Call for Action signed by the leaders of the three main Christian Churches in the Nineveh Plains region of Iraq and addressed to national governments and other international agencies.

“There is still a lot to do” to facilitate the return of Christians “to their respective ancestral communities from which they were expelled during the ISIS invasion of 2014-17.”

So runs the statement signed by the senior representatives of the Chaldean Catholic Church, the Syrian Catholic Church and the Syriac Orthodox Church, together with other members of the Nineveh Reconstruction Committee (NRC) which was jointly formed between them for this purpose. 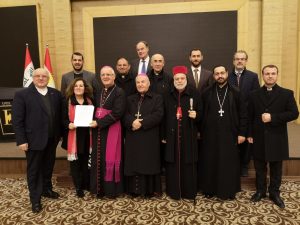 The Call for Action gives the following details of the progress of its work since its creation in 2017: Out of the 13,904 houses registered as in need of renovation, fewer than half, 5,746 have now been renovated while a further 84 are currently undergoing renovation. Only 45.68% of the families who were forced to flee the Nineveh Plains region in 2014 – that is to say 9,060 families – have so far returned.

The gist of the statement by the NRC is that the process of reconstruction of these homes has slowed down in the last few months of 2018, for lack of financial support: hence the urgency of their appeal. “Another 2,000 families are eager to return, but have no means to do so”, they state. They underline the fact that the return of these Christians to their former homes “is a matter of great urgency, since the window of time for returning safely is closing. If they do not return now to repossess their homes, others will occupy them. Moreover, the Iraqi government is not inclined to protect empty houses”, the Call to Action concludes.

What these religious leaders are calling upon the international community to help for is “not simply to give people back their homes, but rather a more integral project” which aims “also to restore their sense of human dignity”. They emphasize the essential need for coordinated financial aid, especially in the field of education, to address “the critical situation of trauma”, and “for the creation of economic stability by boosting small businesses through the development of micro-projects and loans” in order to prevent these communities falling into poverty and deciding to emigrate as a result. Equally necessary, they insist, are measures for the “legal protection of Christians and other minorities and their fundamental rights, especially of citizenship”.

The Church leaders also expressed their appreciation for the important role played by the NRC, a committee established with the support of the international Catholic pastoral charity and pontifical foundation Aid to the Church in Need (ACN International) to jointly oversee the reconstruction programme and the allocation of the financial resources received. Thanks to the NRC, they say, the Christians “instead of being scattered and isolated” have managed to “regain their community life”. They also note that in this region, where “the voice and rol 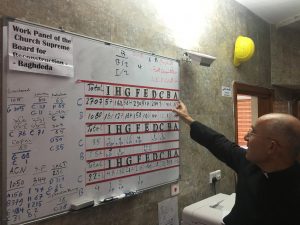 e of the local Church leaders is stronger than in other regions of Iraq” it is “very important that the various local Churches work closely together, united in diversity”, and add that this ecumenical cooperation has “inspired a great solidarity among the people”.

Nonetheless, they point out at the same time that the pressure on the Churches is “enormous” because “people think that the Church can handle it all easily enough”. That is why “we still need a lot of help”, they conclude.

Following the liberation of Mosul and the towns and villages of the Nineveh Plains, ACN came up with the idea for a sort of “Marshall plan” – a reconstruction programme for the region, designed to give hope to the uprooted Christian refugees here and encourage them to return to their homes. ACN dedicated around 7 million $ for reconstruction programme of private houses.

Since September 2018 ACN has also been outlining a programme of financial aid for the reconstruction of the churches and other ecclesiastical structures in the area. 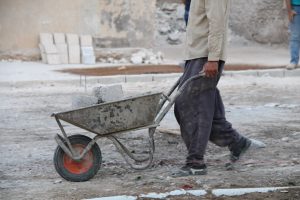 Another priority of ACN’s work is the coordination of initiatives aimed at alerting politicians and international bodies to the need for a long-term development programme for the Christians of the Middle East. And the hard work and commitment of the charity has borne good fruits, among other things in the recent announcement of aid programmes by the German and Austrian governments for the reconstruction of the area. And more recently also by the signing of a new measure on the part of the US government for the allocation of aid to the victims of the genocide in Iraq and Syria.