ALL WE WANT IS PEACE THIS CHRISTMAS!

How Christians in need celebrate Christmas 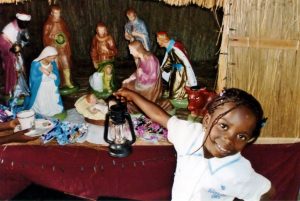 “Christmas is the celebration of the longing for our better self, for the heaven we search for in vain here on Earth, and for the carefree life that exists only in heaven,” Father Werenfried van Straaten (1913-2003), the founder of the worldwide pontifical foundation Aid to the Church in Need (ACN), wrote.

This “longing” is particularly palpable in those countries where Christians live in need and distress. As ACN carries out project work in 149 countries around the world, the organisation encounters witnesses to the suffering, but also a deeply-rooted confidence that springs forth from the power of faith. Three people from ACN project countries talk about how they are going to celebrate Christmas in spite of the adverse conditions and how the message of the birth of Christ gives rise to hope.

Ukraine: “The people no longer know what holidays are”

Christmas in a war zone in central Europe: the fighting in the eastern parts of Ukraine has been going on for five years now. Recent escalations, such as the current struggles between Ukraine and Russia for supremacy in the Sea of Azov, have caught the public’s attention. The same cannot be said about the agonising months of war in between. “And yet people are dying here every day. I have seen so many people die,” Volodymyr Zavadsky explains to the pontifical foundation Aid to the Church in Need.

The 42-year-old has been working as a volunteer of the “Christian Rescue Service” in the port city of Mariupol since 2016. He spent a year as a civilian helper, living with the soldiers directly at the front. Since that time, he has openly worn a rosary on his military-issue protective clothing. “Prayer gives me a sense of security.” Together with a team of priests and volunteers, he now coordinates relief supplies for the combat zone. He organises children’s retreats, catechesis and prayer services, visits old and sick people and provides pastoral care to soldiers and the civilian population. His pride and joy is a centre for 65 children, which his organisation has founded to take the place of the closed schools. “Their childhood is being drowned out by the din of the grenades. They often have to hide in cellars. Many have forgotten how to cry, but their souls are weeping.”

And so it will be another Christmas without holiday cheer in eastern Ukraine this year. “The people no longer even know what holidays are. Fear is everywhere.” In defiance of this fear, Volodymyr and his colleagues are organising a Christmas party for children and people with no family near the city of Donetsk. “We will begin by celebrating Holy Mass, followed by a nativity play for the children – and of course it wouldn’t be a party if we didn’t share a meal,” Volodymyr explains. And for just a few brief moments, the war will be forgotten. “The people have placed all their hope in God.” A hope that also gives the young aid worker the strength to pursue his mission in the war zone. “I hope that one day, love and peace will be the fruits of our efforts.”

Nigeria: “An extra serving of rice is my Christmas cheer”

“Christmas is a time of joy,” Suzanna John (50) says in summary of her thoughts. A sentiment that is almost unbelievable considering all that she has been through. The soldiers of the Islamist terror group Boko Haram may largely have been forced into retreat in northern Nigeria, but there are signs of their former presence everywhere – most of all in the fates of the survivors. Suzanna John is one such example. Boko Haram invaded her village in 2015. Her husband was killed before her eyes, later also two of her sons when they attempted to escape. Since 2009, more than 20 000 people have lost their lives to terror and more than 1.8 million have lost their homes, including Suzanna and her three surviving children.

“We wandered aimlessly for two weeks until we reached Maiduguri,” she says. There, they were taken in by St. Patrick’s Cathedral and have been cared for by the diocese ever since. The diocese receives financial aid from ACN. “The church gave us a place to stay and a little money so that I could start selling charcoal on the streets. This means that I can at least earn a little money to provide for my family.” However, she and her children also receive food parcels because she does not make enough for them to survive on. 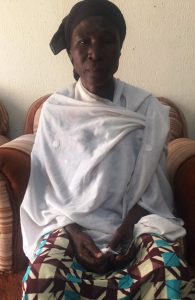 Suzanna’s plans currently revolve around having a modest Christmas dinner. “If I have a little money left over, I will buy a little extra rice. That will be our feast.” But it wouldn’t be terrible if this were not possible. “We always manage with whatever we have. The spiritual is more important on Christmas.”

That is why Suzanna and her family will attend divine services on Christmas, “as we do every Sunday.” At Holy Mass, she prays for the survival of her family, because the situation in the country continues to be unstable. “My greatest hope is that we will one day be able to return to our village,” Suzanna says. “Christmas is the celebration of peace, and that is exactly what 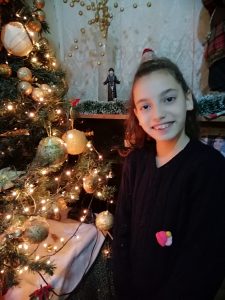 the people in northeastern Nigeria need now more than ever.”

Jorlette Jose Krer is only 12 years old – but has already experienced more in that short time than most adults: the death of her father, emigration and more than six years of war. Jorlette was born in Venezuela. However, when her father died at the age of only 49, her mother, a Syrian, was left destitute and without any support. In 2012, necessity forced her to return to her homeland, to Aleppo. But war was already raging there. “I was never able to go outside or meet friends without someone going with me. You would often hear shots ring out or mortar shells fall,” Jorlette says.

The bitter fighting over control of Aleppo ended in late 2016. This has given Jorlette a greater appreciation of any sign of normalcy, especially at Christmas. “I will attend Holy Mass with my mother and older sister early in the morning. In the afternoon, I will meet my friends in a café in the city centre and drink a hot chocolate with them. I even have saved up some money for this.”

This year, there will again be very few presents under the Christmas tree. But this is not important to Jorlette. “We receive aid from the church. I am very grateful for this.” The church – in Jorlette’s case, this means Sister Annie Demerjian and her team of volunteers. ACN has been working closely with the religious sister for many years. She takes care of hundreds of families in Aleppo. This includes food, medicines and financial aid to help pay for rent and electricity. As large parts of the infrastructure have been destroyed and generators are expensive, many families in Aleppo are still living in the dark.

At the beginning of Advent, the children in Aleppo and other cities in Syria shed a little light into the darkness: more than 50 000 children lit candles, prayed for peace and talked about their dreams for the future. Even Pope Francis participated in the event that was initiated by ACN. Jorlette also took part with her school. Jorlette already knows what she wants to do in the future. “I want to be a scientist and work in a laboratory. I want to discover the world.” –Hopefully, it will be a world of peace.