New discoveries as Christ’s tomb is being renovated – ACN Malta

Exciting discovery as Tomb of Christ is renovated after 500 years

The tomb of Jesus Christ in the Church of the Holy Sepulchre in Jerusalem is being restored. It had been damaged by many years of exposure to humidity from the breath of visitors, and heat from candles burning nearby. 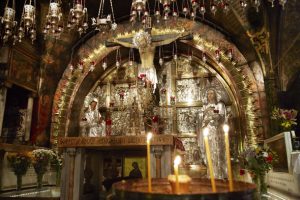 The shelf on which the body of Christ is said to have rested after his crucifixion is currently protected by a structure called an Edicule. This covering is being restored by a team of scientists who specialise in the  preservation of monuments, giving researchers unprecedented access.

Professor Antonia Moropoulou, the chief scientific supervisor of the project, said: “The techniques we’re using to document this unique monument will enable the world to study our findings as if they themselves were in the tomb of Christ,” he added.

Archaeologists in Jerusalem now say they have discovered the original cave where Jesus was laid to rest. Many historians believed that the cave, identified a few centuries after Jesus’ death as his tomb, was destroyed long ago. Exploration work at the Church of the Holy Sepulchre used ground penetrating radar tests to find “hidden layers” behind the marble chamber. Results indicate this chamber hides an actual cave with walls 1.8 metres tall connected to bedrock behind the marbled panels of the chamber.

The tomb’s surface had been covered by a thick layer of marble.This has now been removed to reveal the tomb for the first time since at least 1555, and possibly much earlier. Access to the tomb may also help researchers learn about what prompted Helena, the mother of the Roman emperor Constantine, to identify the site as Christ’s tomb.

“The marble covering of the tomb has been pulled back, and we were surprised by the amount of fill material beneath it,” said Fredrik Hiebert, archaeologist-in-residence at the National Geographic Society working at the site. “It will be a long scientific analysis, but we will finally be able to see the original rock surface on which, according to tradition, the body of Christ was laid.”

On removing the debris, experts were surprised to find another marble piece which they believe hides the original tomb. This second marble slab, which is grey and features a small etching of a cross, dates to the 12th century. It is cracked down the middle, and underneath it is a whitish layer

The Greek Patriarch of Jerusalem, Theophilus III, was waiting outside the Aedicule when Jesus’ supposed burial shelf was exposed. He said the “atmosphere was special”.

“Here we have Franciscans, Armenians, Greeks, Muslim guards, and Jewish police officers,” he added. “We hope and we pray that this will be a real message that the impossible can become the possible. We all need peace and mutual respect.”

The shrine is being renovated at a cost of $3.4 million and the monument, which in its present form dates back to 1810, is being completely rebuilt. Among the donors who funded the restoration is King Abdullah II of Jordan who gave millions of dollars.

Renovation work will involve removal of the marble slabs, repairs to the 12th century Crusader shrine beneath the Aedicule and filling in of cracks in the rock-hewn tomb under that. The restoration of the tomb is due to be completed in the spring of 2017.

The Church of the Holy Sepulchre is visited by hundreds of thousands of pilgrims every year so the noisy work is being done at night to minimise disruption to pilgrims. Ownership and maintenance of the shrine is shared in a complex arrangement between the Armenian, Greek Orthodox and Catholic Churches.