BRAZIL -“To the Indigenas with love” – Rodrigo Arantes – ACN Brazil

BRAZIL – To the Indigenas with love

Missionaries abducted and murdered… their church burned down. No, we are not talking about the Middle East, but about Brazil and about a situation that is little known in the wider world – the situation in the Indigenous Territory of Raposa Serra do Sol in the state of Roraima, close to the border of Brazil with Venezuela and Guyana. It is a region that was seized by colonists and landowners who enslaved the Macuxis, the principal indigenous ethnic group in the region, to work in prospecting for minerals and producing rice in return for cheap alcohol, a vice introduced by the invaders themselves. 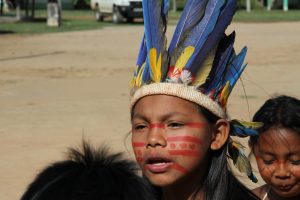 The Catholic Church has also been present in the region from the beginning of the 20th century onwards – first of all with the Jesuits, then afterwards with the Dominicans and finally with the Consolata Missionaries. Theirs is not a mission like most others; when travelling in their vehicles the missionaries have to carry extra fuel and spare batteries in addition to spare parts and reserves of tinned food. If your car breaks down on the road, it can mean waiting for days for another vehicle to pass by, given that mobile phone signals are non-existent and public telephone kiosks something of a rarity.

The strong and active presence of the Church alongside the Macuxis led to the decision by the indigenous peoples themselves to give up alcohol. Those who wished to continue using it had to leave the tribe.

This decision infuriated the local colonial landowners because they were losing their source of cheap labour as a result. They started to stir up propaganda against the Catholic Church, without success however, so in 2004 they murdered some of the indigenous people and abducted three of the Consolata missionaries. The following year a group of around 150 masked and armed men set fire to the whole of the mission complex, including the church of St Joseph and the school run by the mission. Their hope was to stir up the Macuxis to rebel and attack the authorities. This would have resulted in a genocide, since the indigenous peoples would be fighting with stones and clubs against men armed with guns and bullets. 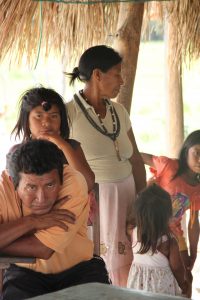 As a result of the fire, the Macuxis were enraged and ready to seek vengeance. But Tuxaua Jacir de Souza (tuxaua is the name they give to the leaders of the Macuxi people) called them together, opened the Bible and read with them for over an hour. He reminded his people that they were Catholic indigenous peoples and that God asks us to forgive, not to take revenge. All the people calmed down and did not take revenge. This action was one of the reasons why in 2005 the Raposa Serra do Sol was formally declared an indigenous people’s homeland and returned to the indigenous peoples. All non-indigenous peoples, those using the land for rice growing, etc. were forced to leave the region.

In this place the simple reading of the Word of God prevented a massacre from happening. The Macuxi people are still very Catholic; they build their own churches with their own materials and their own manpower, they translate the Catholic hymns into their own native Macuxi language. Tuxaua Jacir is known to two Popes on account of his pacific leadership stance. Nonetheless, there is still one thing they are unhappy about; the fact that they don’t have a Bible translated in their own language and they are concerned about their future government. There are sects coming in, trying to woo them away from Catholicism … and some are even offering them alcohol once again so they are very worried, above all for their children and young people.

ACN has recently agreed to pay for the translation of its Child’s Bible into the Macuxi language. A theologian who has a profound knowledge of the language is currently working on the translation, and very soon thousands of copies will be made available for the children. But in order to fund this, we need your help. After seeing the miracle that the Word of God has worked in the region, we must make every effort to ensure that the next generation also grows up in a peaceful spirit and with God in their hearts. We are sure that you too will be happy to help us in this initiative, which is a truly missionary one!

In 2012, during a project trip,. In the recently past they were slaves of colonels, but converted to catholic faith they could be free after an special occasion where they preferred to read the Bible instead fight with the colonels, even after the colonels burned their Church. That time ACN proposed to translate the Child’s Bible to Macuxi, because they were afraid that their children lose the faith. Now, in 2016 the Child’s Bible is finally translated.