Another Chibok schoolgirl rescued with a 10-month-old baby

Another Chibok schoolgirl has been rescued by Nigerian troops. The girl, carrying her 10-month-old son Ali, was found in Pulka in northern Borno state by soldiers screening escapees from Boko Haram’s base in the Sambisa forest. 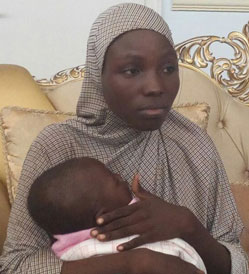 “This morning as part of the operation we’ve been conducting, we rescued one of the Chibok girls. … Our troops in Pulka rescued her along with a Boko Haram member,” Maj. Gen. Lucky Irabor said at a press briefing.

According to “Bring Back Our Girls”, a campaign group with close ties to the relatives of those abducted, the girl has been identified as Maryam Ali Maiyanga and “preliminary investigations” showed she was no 198 on its register of the kidnapped girls. The group said in a statement that she was from Askira Uba, a district in the north-eastern state of Borno, and was abducted with her twin who is still missing.

The announcement came nearly a month after another 21 Chibok girls were freed after negotiations mediated by the International Committee of the Red Cross (ICRC) and the Swiss government with Boko Haram Islamist militants. Until then, there had only been one confirmed release of a kidnapped Chibok schoolgirl – a 19-year-old woman found by an army-backed vigilante group.

Of the 276 girls and women taken from the Chibok boarding school, 57 escaped almost immediately from Boko Haram. Another was found in May after escaping and wandering out of a forest, asking for help, carrying her baby.

The Nigerian government says it’s negotiating with Boko Haram to release another 83 of the schoolgirls. The rest are thought to be either dead or don’t want to leave Boko Haram.

Boko Haram has been fighting a long insurgency in its quest for an Islamic state in northern Nigeria. More than 30,000 people are thought to have died in the conflict . Thousands of other people were abducted by Boko Haram during its seven-year insurgency and many more have been made homeless. Aid to the Church in Need has been providing emergency aid in Nigeria and neighbouring countries for the thousands of displaced families and programmes to assist women who had been abducted, tortured and raped by the militants.