MEXICO: Shooting of Jesuits raises number of murdered priests in the past three years

Two Mexican Jesuit priests, Fr Joaquín Mora, 78, and Fr Javier Campos, 80, were murdered on 20 June by armed men inside the church of the village of Cerocahui, in the Tarahumara mountain range, Chihuaha state, Mexico, while providing refuge to Pedro Palma, 60, a tour guide who was fleeing drug traffickers, and who was also murdered. News of the homicides was made public only the following day, for fear of reprisals among the local community.

The Jesuits in Mexico released a statement decrying the murder of their brothers, condemning yet another violent incident and calling on the local and federal government to guarantee protection and security for priests, religious, laypeople and the entire community of Cerocahui.

“Like many other regions of the country, the Tarahumara Mountain has been facing persistent levels of violence and disregard. Every day men and women are arbitrarily killed, as our priests were murdered today. The Jesuits in Mexico will continue to speak out against this reality which causes so much harm to society as a whole. We will remain, and continue to work for the mission of justice, reconciliation and peace, through our pastoral, educational and social work”, says the order.

According to the international press, the main suspect for this crime is José Noriel Portillo, known as El Chueco, who is presumed to be the regional leader of the Los Salazar, an armed group linked to the Sinaloa Cartel, which operates in the southern Chihuaha mountains. Police are offering a 250,000-thousand-dollar reward for information on his whereabouts.

The Mexican Bishops Conference also spoke out against this violent incident. “We are united in prayer with the Society of Jesus, in the midst of so much death and crime that this country is experiencing, and we publicly condemn this tragedy and demand a swift investigation, as well as safety for the community and all priests in the country.” 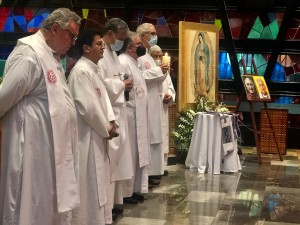 Mass for Fr Joaquín Mora and Fr Javier Campos, two priests in Mexico who were murdered by suspected members of a drug cartel.

The local Diocese of Chihuaha says that this crime was particularly painful “since we are speaking of two brother priests who were fulfilling their pastoral duty to protect and defend life. This violence has reached alarming levels that urge us to conversion and change, to be craftsmen of peace, always in favour of life”.

Speaking at the end of a general audience, in Rome, Pope Francis also expressed his sadness over this crime. “So many murders in Mexico! Once again, I repeat that violence never solves problems, it only increases useless suffering.”

According to Fr Omar Sotelo, director of the Centro Católico Multimedial (CCM), which tracks these crimes, Mexico continues to be one of the most dangerous countries in the world in which to be a priest. The country has seen seven murders of priests since current president Andrés Manuel López Obrador took office, in December 2018.

According to CCM, Fr José Guadalupe Rivas Saldaña was murdered just last month, his body having been found on a farm near the Hacienda Santa Verónica, in Tecate, Baja California. On 30 August, 2021, Fr José Guadalupe Popoca Soto, parish priest of the San Nicolás de Bari church, in Zacatepec, Morelos, was killed. On 12 June, 2021, the Franciscan Juan Antonio Orozco Alvarado found himself in the crossfire of two rival gangs in the community of Mezquital, Durango, and on 28 March, 2021, the body of Fr Gumersindo Cortés González, who worked in the diocese of Celaya, Guanajuato, was found. The first of these seven victims, Fr José Martín Guzmán Vega, from the community of Cristo Rey de la Paz, in the dioceses of Matamoros, Tamaulipas, was murdered on 23 August, 2019.

The pontifical foundation Aid to the Church in Need decries these most recent killings, which once again leave the Catholic community in Mexico in mourning, and restates the findings of the 2021 Freedom of Religion report, that the worst religious freedom violations in Latin America continue to take place in countries with a history of human rights abuses.

Mexico, in particular, continues to see a rash of murders and kidnappings of priests, such as the two Jesuits who, like others, were killed while carrying out their pastoral duties, trying to protect their communities and speaking out against organised crime.