From Nigeria and Pakistan, two voices cry out for justice and religious freedom

for his country’s persecuted Christians. Bishop Jude Arogundade, of Ondo, is still overwhelmed by the fall-out of the deadly attack in his diocese on Pentecost Sunday, June 5, when attackers killed 41 worshippers during Mass at St. Francis Xavier Church. 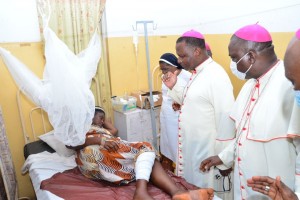 Bishop Jude Arogundade (without mask), bishop of Ondo, Nigeria, visiting the survivor (Mrs. Blessing John) of the terrorist attack.
Attack in of the St. Francis Xavier Catholic church in the diocese of Ondo where dozens of people, who were attending Mass on Pentecost Sunday 2022, were killed.

An act of genocide

“What but pure evil would make a man kill a four-year-old and a two-year-old like this, in church during Mass?”, the bishop asked. He added, without reservation, that the Pentecost attack was an “act of genocide.”

Former Congressman Frank Wolf, perhaps the strongest advocate for religious freedom on Capitol Hill ever, agreed with the bishop: “this is genocide,” he said comparing the situation in Nigeria to similar acts perpetrated by ISIS in northern Iraq. Bishop Jude asked the US for help in the search for justice and to protect Nigeria’s Christians, with former Congressman Frank Wolf calling for the appointment of a special envoy for Nigeria or the Lake Chad Region, as well as a Congressional Caucus for Nigeria, with lawmakers especially focused on the needs of the country and region. Such an envoy, said former Rep. Wolf, would need to have real clout, with access to the State Department and an ability to tap the power of the UN and other institutions. Barring significant action, Nigeria risks becoming a “terror state or a failed state,” he said. 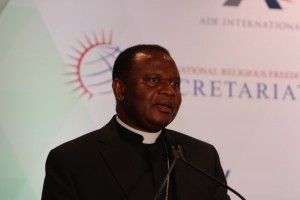 The bishop, who pledged to “spend his life seeking justice” for victims of Islamist terror, sees the atrocity as an expression of a more than 200-year-old push for a caliphate first launched by Islamic jihadist Usman dan Fodio. That explains, said Bishop Jude, the fervour of the violence targeting Nigeria’s Christians. Bishop Jude later told ACN that, in his opinion, the signs point to the Pentecost massacre having been carried out by militant Islamist Fulani herdsmen, though the Nigerian government has yet to formally identify the terrorists. The government’s silence, compounded by the fact that President Muhammadu Buhari is himself a Fulani, gives rise to concerns of complacency, if not complicity, stated Bishop Jude. The bishop stated as well that the Islamists increasingly bold and extreme acts of violence are intended “to make territorial gains”.

The plight of Nigeria’s Christians, said Bishop Jude, shows the contrast between Christianity – which, in all its forms and expressions, “values life as the ultimate, highest good – and radical militant Islam, which pursues as its highest good Islamist ideology,” such as the establishment of the caliphate to cover the entire nation, no matter “the cost to human life and dignity.” The bishop firmly rejects the theory that the attack in his diocese on Pentecost Sunday was somehow driven by climate change and the competition with Christian farmers for arable land. This concept, he said, “is an insult to the victims.” 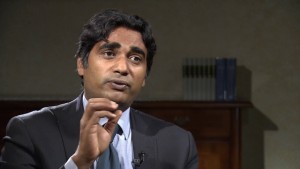 ACN also brought to the Summit a second speaker about religious freedom, Professor Shahid Mobeen, who teaches metaphysics at the Pontifical Urbaniana university in Rome. The Pakistani academic is committed to exposing radical extremism in his native country, and beyond. At the summit, he spoke on Pakistan’s blasphemy laws and the growing trend of abductions and forced conversions of young girls.

Regarding the blasphemy laws, he told ACN that the release of Asia Bibi by order of Pakistan’s Supreme Court was a clear victory for justice, “even as bigger issues remain.” The verdict showed that, at least at the highest level, “justice can be served.” However, added Prof. Mobeen, lower courts are failing to protect the innocent, as judges are afraid of Islamist reprisals should they free those falsely accused of blasphemy. Plus, for ordinary citizens, getting a case heard by the Supreme Court is a very costly and lengthy process, among others, requires relying on very expensive, exclusively Muslim lawyers.

What the Asia Bibi case showed beyond doubt, said the professor, is the “power and importance of publicity,” of getting the word out and drawing international attention, triggering action by Western nations, and putting pressure on Pakistan’s government to address grave injustices.

Prof. Mobeen hopes the opportunity to address the summit will help put the spotlight on a still little-known trend in religious persecution – the abduction and forced conversion of young girls from religious minorities at the hands of adult Muslim males.

According to local reports from some NGOs, this criminal phenomenon, often including grave sexual abuse, affects more than 2,000 victims each year in Pakistan, double the number estimated by many. Of these girls, according to Mobeen, 40 percent are Christians, another 40 percent are Hindus, 15 percent Sikhs and 5 percent Shiite and others.

“If you are not in the media, you are invisible”

The practice, which also takes place in Egypt, Nigeria and elsewhere, “spoils future generations of Christians.” There is a “ripple effect,” as the girls, after their release from bondage, often find it very difficult to find a marriage partner, and when they do marry, “there is enormous pressure on the husband and children.” In addition, parents whose daughters return home, find it difficult to accept their now “tainted” child, “for fear her experience will hurt their other daughters.”

“The key to bringing pressure on the Pakistan government to provide justice lies in international visibility,” said Mobeen. “If you are not in the media, your issue becomes invisible. We must speak up.”

The International Religious Freedom Summit provides an excellent platform to do just that. According to Thomas Heine-Geldern, executive President of ACN, “this is a part of our mission that we take very seriously”. “ACN has worked for decades to bring solace and relief to suffering Christian communities all over the world. But it is likewise important that we help them raise their voices, and make them heard in our countries, so that people are aware of what is going on. The world needs to hear about the suffering and discrimination of Christians in Nigeria and in Pakistan so that decision- makers cannot ignore the issues in these countries”, he adds.