WORLDWIDE: How ACN is promoting and safeguarding family life

At a time in world history of unprecedented attacks on the family, Aid to the Church in Need (ACN) is aware that if it wants to live up to its name it has to support families.

Over the past year ACN has approved over 100 projects specifically aimed at supporting Catholic families in countries that range from Burundi to Venezuela, with close to 3.5 million euros.

In some cases, this help takes the form of promoting the dignity of outcasts. The Catholic Church in the Diocese of Hazaribag, in northern India, is made up almost exclusively of members of the Dalit community, considered untouchables in the Indian caste system, this strictly hierarchical system of society officially abolished in 1950 but still in effect. The message of Christ, that all have equal dignity as sons and daughters of God, heals and empowers these communities.

With the aid of ACN, the diocese has set up a Family Counselling Centre that works with families in different stages, to strengthen them in the faith.

“Our programme helps couples, widows and widowers, elderly parents, and families to renew their family, community and personal life. The faithful have increased their love and faith in God and for the Church. Thank you very much for all the financial and prayerful support that you render to our faithful in Hazaribag. We and the families of our diocese are ever grateful to you for your generosity”, says Sister Blessy, who helps coordinate the project, in a message to ACN.

Meanwhile, the Kananga region of the Democratic Republic of the Congo could be a paradise if not for the human conflicts that have torn societies apart. Fr Louison Kuenda, ACNs local partner for this project in the Diocese of Luebo, explains that “the conflict has caused enormous damage: 85 schools and 30 health stations have been burned or destroyed, and several villages have been burned! Thousands of families are still living in the bush because their houses are destroyed”.

The Diocesan Commission for Pastoral Care was founded to support these families, and has been working to get a better understanding of the situation of the families in the region. It reaches out to families who are living in the bush, too afraid to go home, and tries to convince refugees to return and help rebuild. It also trains people and families in conflict resolution and peaceful cohabitation. 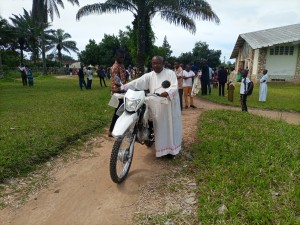 In search of a way to better reach the families that need its pastoral support, the Church turned to ACN, which provided three motorcycles, one for each pastoral region. “Without an efficient means of transport adapted to our roads, we would not be able to achieve our goals. The damage is enormous in every pastoral region. Without these motorbikes, we are unable to help the families in need”, Fr Louison explains.

Protecting families from the culture of death

A very different approach is taken by the Church in Eastern Europe. Few states promoted the culture of death as persistently as the Soviet Union, and its effects are still felt in countries such as Belarus, where abortion, drug addiction and suicide rates are rising, including among young people.

Faced with this situation, the local Church realised that it has to provide its families with protection from what Pope Francis has termed ideological colonisation.

A Council of Experts on Life and Family was established in the Diocese of Minsk-Mohylev. These experts work in the field of the defence of life and family, vetting draft legislation for anti-family policies, counselling Church and state leaders on emerging trends and legal norms, and spreading information through general and Catholic media, to keep society informed.

ACN helps pay for transport costs, IT equipment, and printing of published materials.

These are local projects, addressing specific local needs, but ACN sees them as part of the same struggle. “The culture of love needs our support. It is vital to the existence of the family. If we do not strive to protect and defend our children and young people, marriage and the family, then the tide of evil will sweep away the foundations”, says Fr Martin Maria Barta, Ecclesiastical Assistant at ACN-International.