IRAQ: New Iraq convent is a milestone in Christians’ return

“We must have faith to rebuild the village, and you are a sign of that faith”, Archbishop Thabet told dozens of Dominican sisters gathered for the inauguration of their new Convent of Saint Joseph.

Batnaya used to be an important hub of Christian life in the Nineveh Plain, in northern Iraq. Around 5,000 Christians, almost all Chaldean Catholics, lived in the village in 2014, but the entire population had to flee when terrorists from the Islamic State (IS) overran the region in August of that year. 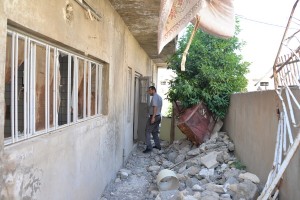 The jihadist terror group was eventually defeated, but the buildings, including two important churches, were almost entirely destroyed, and the population scattered, some to refugee camps, while others emigrated.

But the Dominican sisters were not willing to give up on their village and their community. Set on returning to Batnaya, they first moved into a house that was loaned to them by a generous resident, before their new Convent of Saint Joseph was built, largely with financial support from pontifical foundation Aid to the Church in Need (ACN).

Speaking at the consecration ceremony of the new building on December 18, Archbishop Paul Thabet, of the Chaldean Archdiocese of Alqosh, said that this new construction was about more than bricks and mortar, it was about giving life and hope to the community.

“Consecration is a call through which God builds up the Kingdom of Heaven. Wherever monastics come, they can change the desert into a paradise, and the presence of the nuns and their coming to the stricken and demolished village is a sign of great reconstruction. We are not only rebuilding stones, we are restoring humanity”, said the Archbishop.

“The presence of the nuns in this village is a sign of encouragement for all the people of the village to return, too. Under the destruction we also see signs of true beauty, the beauty of the soul that you want to build. So, the presence of the monks, nuns, and the Church is a sign of encouragement for our brothers from this town. We Christians in Iraq have a deep wound, this wound must be healed by faith, and you are the sign of this faith”, he told the many sisters who gathered in the chapel of the convent for the blessing.

If the roots dry up, the branches will die 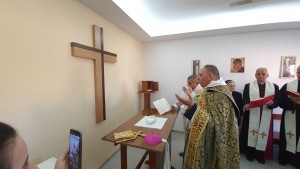 Now, the Archbishop continued, it is time for other citizens to return as well. “Your name and identity are in Batnaya and your roots are in Batnaya, not in the places of emigration. I also encourage you to support the village and be present in it on occasions, because otherwise these roots will dry up, and if that happens then the branches will surely die. We must have faith in order to rebuild the village.”

Speaking on behalf of the Dominican community, Sister Huda Sheto thanked all those who had contributed to the building of their new convent, specifically mentioning ACN. The nuns, she insisted, are in Batnaya to “accompany the believers, to live their faith, to share their prayers, their lives and their needs, and to provide as many spiritual services as possible”, including education for children in the convent’s kindergarten.

The consecration of the new convent was attended by many residents of the village, as well as local authorities, members of the clergy, and ACN’s representative in Iraq. Local women let out traditional ululating cries of joy as Archbishop Thabet cut the ribbon on the gate and blessed the statue of Saint Joseph outside the convent, and all those present shared a celebratory meal after the event, rejoicing in the fact that life and faith have survived terror and are returning to Batnaya.

ACN has been deeply committed to restoring Christian life in Northern Iraq, and has helped fund many rebuilding projects, including in Batnaya. The foundation has called on the international community to help Iraq achieve the stability and economic development it needs now, for its population to stabilise and not seek a better life abroad.