DR CONGO: “The silence of the international community angers us”

Only days after a terrorist attack on a Protestant church in the east of the Democratic Republic of the Congo, Marcelo Oliveira, a Combonian who works as a missionary in the African country, denounces the silence of the international community before these terrible acts of violence and highlights the fear of the population, especially in areas which are affected by several armed militias. “Terror is widespread”, says the priest, in a message sent to international foundation Aid to the Church in Need (ACN). 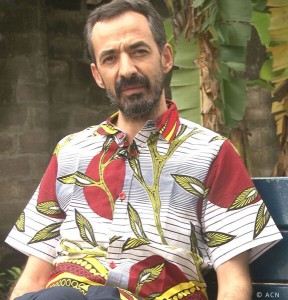 The brutal terrorist attack that took place on Sunday, 15 January, against a Protestant church in Kasindi, in the province of North Kivu, near the border with Uganda, continues to cause much indignation, given that it was a premeditated attack on a Christian community. Father Marcelo Oliveira, a Portuguese priest with the Comboni missionary order, who has been in the DRC for several years, speaks of anger in a message sent to the Portuguese office of ACN.

“Attacks are common in this area of north Kivu, in the east of the country, and the rebels have the habit of attacking villages and spreading terror among the people, who are then forced to flee and hide in the forest until the militias leave again”, the priest says. “Their goal is to get people to run, so that they can take part of their land, which is full of natural resources”, he explains, adding that in this part of the country “terror is everywhere”.

Camp for the displaced in Goma.

For Fr Marcelo, who is responsible for the province of the Combonian missionaries, the worst part is the silence with which the world sits back and watches all this violence visited upon poor and defenceless communities. “It’s one village here today, another there tomorrow, and all this in silence. And this is what gets to us, as missionaries, seeing the silence of the international community, the deafening silence while human lives are massacred.”

The attack on the Protestant church, on 15 January, is part of this strategy of terror. This time the attack was carried out with a homemade explosive device and claimed by the Allied Democratic Forces (ADF), which chose that particular Sunday knowing that the church would be particularly full, as “the community was celebrating baptisms”. The bomb was placed in the middle of the congregation and left at least 15 dead and dozens of wounded.