Priest murdered in attack on parish in Northern Nigeria

Fr Isaac Achi was reportedly burned by unknown gunmen, and his assistant Fr Colins Omeh sustained gunshot wounds. Reports also emerged of the kidnapping of another priest in Southern Nigeria this Sunday.

A parish residence was attacked this Sunday, January 15, in Niger State, Nigeria, resulting in the death of one priest and the wounding of another.

According to information sent to Aid to the Church in Need (ACN) from local Church sources, a large number of gunmen stormed the priests’ house in the parish of St Peter and St Paul in Kafin Koro, Minna diocese, burning it to the ground. The priests’ residence is located at the exit of the town, which is halfway between Minna and Abuja, and has a significant Catholic presence. The attack happened in the early hours of Sunday morning.The same sources claim the attackers aimed at kidnapping the parish priest. “Because of the dimension and the duration of the assault, we can say that it was planned and organised”, the local contact told ACN. Pictures and a video received by the pontifical foundation show the dimension of the attack and the damage caused by the fire.

Media reports say that Fr Isaac Achi managed to contact relatives, who alerted the police, but when the authorities arrived they were unable to help the priests. 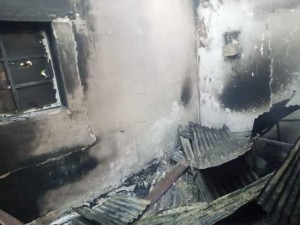 The parish house burnt down by the gunmen

There are conflicting reports about exactly what happened, and ACN is still waiting for further details, but some reports in the media say that after about an hour of trying to get into the residence, the gunmen doused the outside of the house with fuel and set fire to it. Fr Colins Omeh, who was also in the rectory, tried to flee the house, but was shot, while Fr Isaac Achi was unable to leave the house and was burned to death inside.

The death of Fr Isaac Achi is the second murder of a Catholic priest in the first two weeks of 2023. Fr Jacques Yaro Zerbo was murdered in Burkina Faso on January 3. According to Nigerian press, Fr Achi had previously survived a bombing attack in 2011.

The news of this most recent attack in Nigeria comes on the same day as Nigerian press published reports of the kidnapping of a priest in Omu Ekiti, in Oye Local Government, South Nigeria. Fr Michael Olofinlade, of the Archdiocese of Ibadan, is the first Catholic priest to be kidnapped in Nigeria in 2023.

Nigeria has been a particularly dangerous country for Catholic clergy over the past years. In 2022 four priests were murdered in the country, and 28 were kidnapped.

Aid to the Church in Need asks for prayers for the repose of Fr Isaac, for the healing of Fr Colins, and for the local Catholic community and the Diocese, which was deeply affected by the incident. It also prays for the safety and quick release of Fr Olofinlade.