Egypt’s Christians: ” Between fear and trust in God” – Andrea Krogmann

Egypt’s Christians – ” Between fear and trust in God”

Coptic Catholic Bishop Kyrillos William believes that the most recent attack on the Coptic cathedral in Cairo has stoked fears of further Islamist attacks in Egypt. However, in an interview with Andrea Krogmann of Aid to the Church in Need (ACN), the bishop of Assiut said that, at the same time, a “deep trust in God” can be felt among the country’s Christians. Bishop Kyrillos views the efforts of Egyptian President Abdul Fattah al-Sisi as positive for the country’s future.

ACN: Bishop Kyrillos, how would you assess the current situation in Egypt from a Christian standpoint? 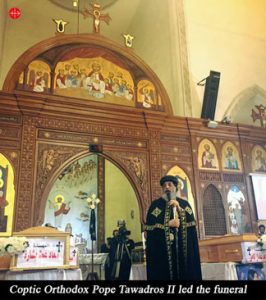 Bishop Kyrillos: The latest episode of brutal terrorist attacks on believers in Cairo has called forth deep sorrow among Christians. We are very upset. It was only last Tuesday that the Coptic church received the 26th martyr of the latest attack, a ten-year-old girl who had died of her injuries. However, at the same time, we are seeing a deep trust in God and great strength. The same can be said as in earlier cases: when terrorist attacks are carried out to keep people from going to divine services, more than usual attend.

How did your non-Christian neighbourhood react?

Bishop Kyrillos: We are experiencing a great deal of solidarity and sympathy! Many called or even came to express their condolences. The state reacted immediately and opened investigations. The president himself said that he would not have been able to attend the funeral service for the victims if he had not been able to name a perpetrator. That means a lot, especially when you consider that in other cases, such as the attack in Alexandria a few years ago, there are still no leads on possible suspects today. In such cases, people think that the police and the state are helping the perpetrators. That is not the case this time. A president who personally attends the funeral service and shakes the hand of each family member and all church representatives, that sends out a strong signal.

Did the attack in Cairo stoke fears of further attacks during the Christmas celebrations?

Bishop Kyrillos: Yes, the fear remains. The “Islamic State” has announced further attacks, which means that it is still possible.

Have special security measures been put into place?

Bishop Kyrillos: Those who are responsible for this came to us and asked us for our cooperation. In addition to external security, which is their job, they want to train our people, show them how to be vigilant. Among other things, our scouts, who are responsible for security on feast days, will receive civilian security training from the authorities. Metal detectors are also to be installed in front of our cathedral and our guest house. That is expensive, but important. Of course we know the members of our parishes, but feast days are just the times when many strangers attend, as well-wishers, for example.

Do the Christians feel adequately protected by this?

Bishop Kyrillos: For many years now, soldiers have been stationed in front of a number of the churches. However, the problem is that they are neither very well equipped nor very well trained, so that  many churches are saying: we don’t need them because it does little good. More effective methods need to be found, such as better trained and better equipped security forces. However, on major feast days, special measures such as road blocks and increased security personnel are of course in place.

What New Year wish do you have for your country and your believers?

I wish for peace for our country, of course. We see the efforts of our president, who wants Egypt to have a future. These efforts are being undermined by terrorist attacks. The country also needs peace for tourism, which is an important source of income. If there is no peace, then no tourists will come.

Aid to the Church in Need is helping Christians in Egypt build churches, educate priests and provide pastoral care to young people. About ten per cent of the inhabitants of Egypt are Christians. The majority of these belong to the Coptic Orthodox church. Most of the country’s approximately 250,000 Catholics are members of the Coptic Catholic church.