Archbishop Sebastian Francis Shaw of Lahore says: “The Christians of Pakistan are champions of mercy”

“Happy New Year to all the benefactors of ACN, and thank you for all your help.”

So says Archbishop Sebastian Francis Shaw of Lahore, the largest diocese in the whole of Pakistan. A Franciscan and a member of the Order of Friars Minor, he heads a diocese of over 450,000 Catholic faithful in the capital of Pakistan’s Punjab region. He was speaking to Josué Villalón of ACN (Aid to the Church in Need).

The year 2016 was a difficult one for Pakistani Christians, during which they suffered one of the worst jihadist attacks on Easter Sunday. An Islamist terrorist blew himself up in the central Gulsan Iqbal Park in Lahore, leaving behind 78 dead and over 300 injured. Yet at the same time it has been a year of hope. The Year of Mercy initiated by Pope Francis has been lived with great intensity by the Catholics of Pakistan.

ACN: How is the present situation in Lahore? 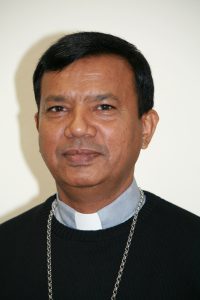 Mons. Sebastian Shaw: It appears to be a little better. Security has been improved around our religious celebrations. The people are cheerful and motivated. They prepared themselves spiritually for the Christmas feast, and they were very happy to be able to celebrate this feast. But at the same time people were a little frightened because, as happened last Easter, we knew that we could well be attacked during the Christmas season.

Apart from the fear of possible attacks, how do people celebrate Christmas in Pakistan?

The truth is that the people love to celebrate Christmas. They decorate their homes with stars, and on 16 December they begin a Christmas novena. And of course they also go shopping, like everyone else in the world.

What is the meaning of the stars that the Christians in Pakistan put up for Christmas?

In Pakistan Christians put up stars in their homes, in the streets, in the churches and schools in order to show that Jesus Christ is the Light who has come into the world and express their hope that by this light the darkness will disappear. The darkness that is war, that is discrimination. We need the light of Christ to illuminate our path and so that darkness may be defeated. So we put up stars as a symbol of our faith in Christ.

What is the importance of the Christians of Pakistan for the Church and for the rest of the world?

Pakistan is an overwhelmingly Islamic country with a population of around 190 million, in which Christians make up just 2%. We are a very tiny minority, yet at the same time we are a very living Church. The great majority of the Christians are very poor, but we are very rich in our faith. They are really interested in the Word of God and there are very committed lay people involved in the work of catechesis who are helping young people and married couples to live their faith with fervour. For example, this Year of Mercy was a very special time. The Christians of Pakistan are champions of mercy. I recall that one day, after celebrating Holy Mass I went up to a married couple to give them my blessing. They told me that my homily on mercy and pardon had helped them greatly, since they had lost a son in the attack in the Gulsan Iqbal Park on Easter Sunday and that they had forgiven the suicide bomber who blew himself up in that attack.

What is your assessment of the year 2016?

We experienced some very difficult moments, such as the terrorist attack in Gulsan Iqbal Park, but the people are getting back on their feet. The Year of Mercy has been a great blessing for the whole Church and especially for the Church in Pakistan. We celebrated many encounters of dialogue between the religions. We give thanks to the Pope for this Year of Mercy, and for the prayers and the help of so many people who have reminded us that we in Pakistan are not alone.

How are the relations with other religious groups?

This is the moment to promote increased dialogue between religions, and especially with Islam, which is growing greatly, including in Europe. I’m very proud of the good relations we have with the leaders of other religions. We celebrate each other’s festivals; they celebrate Christmas with us and we also celebrate the end of Ramadan with them. But in order for there to be a genuine dialogue it is important that our young people are well instructed in the Word of God. It is also important for there to be unity among Christians. It is important to teach the Bible to the young people, not so that they know it by heart, but to put it into practice through love for neighbour.

What are the principal needs of the Church in Pakistan?

Education is important to us. We especially want to make it possible for young Christians to go to university, even though it’s very difficult because it requires a lot of money and the Christian families are very poor. We also need to rebuild the churches and mission stations. We need to renovate our seminary. We have many vocations and we need to extend it. At present we have 34 young men in the minor seminary, 12 studying philosophy and 10 theology.

What does the help of ACN mean to the Church in Pakistan?

We are extremely happy and grateful to ACN. You have been helping us to raise up the Church, not only the physical building, but the body of the Church, bringing hope and faith, and especially with the training for catechists and with catechetical material, such as Bibles in the Urdu language. I ask Christ, who has come into the world, to bless all the families. I pray for them and wish them prosperity and peace.