For the past few weeks, Aleppo city has been breathing sighs of relief. Since the rebels reached an agreement with the regime forces and its allies to evacuate all civilians and militants from their last stronghold in east Aleppo city, finally there can be some peace.

From the very start of the Syrian civil war, Aleppo has paid the greatest price on the humanitarian, social, economic and environmental level. Many people had to abandon their houses and shops because of the violence. So many lives were lost, leaving countless numbers of widows and orphans. Trees and park benches were chopped by those desperate for heating, given the scarcity of fuel and gas and exorbitant prices. Once a city of five million inhabitants, only 1.5 million people remain.

This particularly cold winter many families are left homeless, finding shelter in the streets, in abandoned factories and construction sites. Humanitarian agencies are not managing to coordinate their activities, which has resulted in chaos. Most of the evacuated children have not been able to go to school for the last three years, which spells disaster for the next generation of adults. Disease is spreading freely among women and children – many of them left without a father – who were evacuated from eastern Aleppo.

No Christian here ever thought of leaving Aleppo were it not for the hell in which people have been living. The humanitarian conditions are horrific. The city has been without electricity for the past six months! Even when the power lines are operating normally, only one or two hours of service at best is provided. Water is cut off routinely and many parts of Aleppo have been without water for 40 days. The ancient historic churches in the old city area are destroyed beyond repair.

Aleppo was home to 120,000 Christians before the war; now only 30,000 remain. The war, the violence, the horrible humanitarian conditions, and the fear for their lives and the lives of their children forced families to take the tough decision to flee to Lebanon or beyond.

Clergy and men and women religious who have remained are continuing their ministry to those who are still here. Jesuit Relief Services here serves 10,000 hot meals every day to people of all faiths and backgrounds; we also hand-out baskets each day with both food and non-food items. We also provide medical and social services. All the Churches in the city work in harmony to help Christians and Muslims alike. 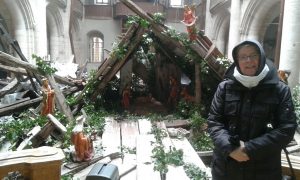 Despite these harsh conditions, Christmas still brought a message of hope—hope for peace that has been so elusive for five years. Bells rang out in the churches that were still standing, announcing glad tidings: Emmanuel, God is with us. My Christmas Mass homily had as its theme: “Mercy: the hand that opens the doors so that the spirit of love may come in.”

My reflections will touch upon something few in the West realize: Christians in Aleppo have always played a major part in mediation between warring factions. They need to continue to play that vital role, especially now, when the country has taken a step toward a new chapter of peace and reconstruction. Syrian Christians will follow the lead of Pope Francis, who insists that that there is a three-part solution to the Syrian crisis: forgiveness, dialogue, and reconciliation. Bringing that about is the calling of every Christian in Syria today. 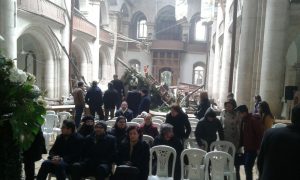 How was it like to celebrate Christmas without fighting for the first time in 5 years?

People are finally able to feel much safer when going out on the streets and going to church to participate in Mass. I believe nobody skipped the Christmas Mass knowing that the city is safer from the arbitrary shelling and bombs that used to hit the city. Many churches were damaged during four and a half years of war, but Christmas services were held at some of those churches to thank God and celebrate the occasion.Each church was visited by Santa and they distributed gifts to the children of their congregation.

Were you also in East Aleppo to celebrate in places where you could not celebrate last year?

There are no churches left in East Aleppo to celebrate Christmas. I went to Jibreen district, where the displaced people from eastern Aleppo were placed, and distributed humanitarian aid.

Did the majority of the population in Aleppo celebrate Christmas or just the Christian population?

Celebrating Christmas in Latin Parish of St. Francis in Aleppo,Syria 2016

population. Even before the war, the Muslims used to come to the Christian neighbourhoods to enjoy the festivities and the celebrations. This year, a big Christmas tree was set up in Al-Azizia district and was lit with countless lightbulbs. Most of the city officials and citizens came to see the tree and take pictures with it on Christmas day and the following days.

How is the humanitarian situation in Aleppo now? Do you have electricity and water again?

Aleppo has been without electricity and water for five years in a row now. People still rely on generators and water delivered by small trucks to fill their house tanks. The humanitarian associations and churches continue to support the people during these difficult times.

Father Hilal, S.J., is the representative in Syria for the international Catholic charity Aid to the Church in Need (ACN). Since the beginning of the Syrian civil war in 2011, ACN has spent approx. $20M in support of the persecuted and suffering Church in the country.