CAMEROON “We are still alive because we were in church.” – Eva-Maria Kolmann

CAMEROON – “We are still alive because we were in church”

Time and again, the northern part of Cameroon has become the scene of suicide attacks by terrorists from Boko Haram.

The people in Maroua-Mokolo are afraid. Time and again, the dioceses located along the border to Nigeria have become the scene of attacks by Boko Haram. When Bishop Bruno Ateba Edo celebrates Holy Mass under a tree, the faithful often hold each other by the hand to form a human chain. This is to keep suicide bombers from mingling unnoticed among those in prayer. Before Mass, volunteers check those attending divine services for weapons and explosives. It is forbidden to carry large handbags. 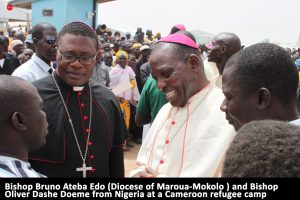 “Many of the suicide attacks are carried out by very young people. Only one month ago, two young girls blew themselves up on the market of Mora. They were not even twenty years old,” the bishop told the pontifical foundation Aid to the Church in Need (ACN). “The people live in constant fear of attacks. It has already become a psychosis.”

The danger is especially great at larger gatherings of people. However, the Catholic faithful are not letting this stop them from gathering together to pray. “Prayer is our strength and our hope. We need prayer! We want to pray! Especially prayer in community is a sign of hope,” said Bishop Ateba. When this past February two suicide bombers killed at least 20 people and injured dozens on the market in the village of Mémé, prayer even saved people. “At the time of the attack, many market women and other people from the village had just gone into the church to take part in the Stations of the Cross. They say ‘We are still alive because we were in church. We would have died without the Stations of the Cross.’”

Bishop Ateba is disappointed that the dramatic situation in his diocese hardly ever receives attention from international media. “I would like to see greater attention being paid to that which is happening here in northern Cameroon. When something happens in Europe, the news immediately spreads around the entire world. It is like an earthquake. But if people die here in Cameroon or in other African countries, it is not a big issue. Some people probably think that the victims were ‘only Africans’. And yet, today it is also often said that the world is a village. The media should exert more pressure. They have power and strength. I would like to say to the media, ‘Take a close look, no matter where something bad has happened, and report on it!’” 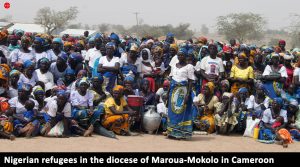 In addition to the tensions caused by the terrorist attacks, there is also a humanitarian problem. Almost 80,000 refugees from Nigeria are living in a huge refugee camp in the Diocese of Maroua-Mokolo. “Many of the people would like to return to their homelands, but they need safety and prospects! Many have already been there for four or five years and cannot go home,” Bishop Ateba explained. The Catholic refugees are receiving pastoral care from a Nigerian priest who speaks their language. Aid to the Church in Need gave 14,900 euros to help build a chapel. The bishop is very grateful for this. “Almost 5,000 Catholics are living in this camp. Two Holy Masses are being celebrated there every Sunday. Having a place of prayer sets an important sign. Thank you for helping us!”

In addition to the Nigerian refugees, there are also over 50,000 Cameroonians from villages situated directly at the border who have fled because the situation there is particularly dangerous. Most of them have found shelter with friends, acquaintances or relatives. They are only being supported by the Catholic church. For this reason, Aid to the Church in Need provided 75,000 euros in emergency relief last year to meet the needs of those who have become homeless. The bishop himself is also poor. He lives in a small room without a bathroom. He does not even have an episcopal church. His riches are the people in his diocese.

However, what makes him very happy is that there is no dearth of vocations. Thirty young men from the Diocese of Maroua-Mokolo are currently preparing for the priesthood. This year, Bishop Ateba has already ordained two to the priesthood, and on All Saints’ Day he will ordain three young students to the transitional diaconate.

And Bishop Atebe had even more welcome news to report: he is very pleased about the “wonderful dialogue” that has opened up with Muslims, despite the problems with Boko Haram. Many Muslim children – even the sons and daughters of religious leaders – are attending Catholic schools. “The average Muslim is also against Boko Haram,” he said.

Each day after Holy Mass, the Catholic faithful pray that God will grant them peace. The situation has already improved a little, because Boko Haram is not carrying out as many armed military attacks in the region as before. The terrorist organisation has been weakened by the joint military campaigns of troops from Nigeria, Niger, Cameroon and Chad. “However, the hope of the people is primarily rooted in their belief in God,” the bishop repeatedly emphasised. “We trust in prayer. Prayer is our strength. We pray because we need peace. And, despite the attacks, we will not stop gathering and asking God for this peace together!”

Aid to the Church in Need spends approximately 1.5 million euros on aid for Cameroon each year.