“Even if it has to be silently, it is better to be there than not to be there”, explains Bishop Giorgio Bertin, the apostolic administrator of Mogadishu and bishop of Djibouti, referring to the presence of the Catholic Church in this part of the Horn of Africa, where he has been living and working for almost 40 years now. 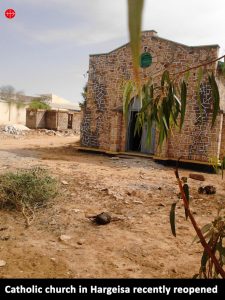 The Italian prelate’s face lights up when he is asked about the little church of St Anthony of Padua in the town of Hargeisa, in Somaliland (an autonomous region in northern Somalia and currently a self-declared independent state, though not internationally recognised). “It was built by the Capuchins in 1950, but for many years it remained closed. Before the rebel uprisings against the Somali authorities in Mogadishu I used to celebrate Mass there at least three times a year, including Christmas and Easter… Back then it was very dangerous.” In 1996 a Caritas co-worker began doing work there, including building a wall, but it was dangerous to be there; it was shut down and there was a man watching over it. “Then last January I spoke with the authorities in Hargeisa, explaining that we would like to open the church again and that it would also be a place from which humanitarian activities would be carried out with Caritas. They agreed, and so I re-consecrated the church”, he replies, smiling broadly from ear to ear. He is speaking to staff of the international Catholic pastoral charity Aid to the Church in Need (ACN) in Rome, during a lightning visit to Italy. “Not many people come to Mass – ten at the most – but nonetheless, it is important.”

This small church in Hargeisa is the one and only place of Catholic worship in the whole of Somalia at the present time, a country where every day “there are more and more mosques, thanks to the financial aid from Saudi Arabia”. For Catholics, however, “there is no possible way of having a presence in Mogadishu, since it is very dangerous. There are a few Catholics, but if they engage in any activities, for example with Caritas, they will be risking their lives. We can only be present there through the intermediary of other Somali associations.”

It was 27 years ago, after the assassination of Bishop Salvatore Colombo, that the Holy See asked Bishop Bertin to become apostolic administrator of Mogadishu, after the rebels had destroyed almost the whole of the Somali capital and the entire physical presence of the Catholic Church. “They deliberately targeted us, though not only us; in fact they destroyed everything – the embassies, public institutions…” It was a rebellion on a scale that amounted to a before and after in the history of Somalia, a country where it has still not been possible to form a state, but where instead the country has been split up into different regions which have become self-proclaimed independent states, the majority of them unrecognised ones.

In Djibouti the Church is respected

Bishop Bertin is careful to explain that the independent state of Djibouti, where he currently lives, is quite different from Somalia. “We are left in peace there; there is no danger and the Church is respected.” Currently there are around 5,000 Catholics living in this former French colony, the majority of them foreigners who are working there, or else French people or people who have come here from Ethiopia. “There are also some native Catholics from Djibouti itself, whether from past family tradition, or orphans who were brought up by Church institutions, but they are the minority.”

“In Djibouti the major task of the Church is the schools and the work of Caritas”, the bishop assures us, touching the wooden pectoral cross around his neck. “They are like our two arms”, he adds. “Our pastoral work there is very limited, and even though we do not make converts or set out to do so, we are nonetheless sowing the seed of the Gospel among the people, given that 99% of the pupils in our schools are Muslims. They know that we are sincere and that we respect them, and they respect us in return.”

In this overwhelmingly Muslim country there are around 30 Catholic religious, with two catholic churches and four mission stations. “A priest or a religious sister is not there for the Catholics only; they are there as a presence in society, in contact with the people and open to them. We cannot remain closed up within our structures”, explains Bishop Bertin, who first set foot in the Horn of Africa in 1969 and has lived there permanently since 1978.

He was recently received in audience by Pope Francis. “He listened to me, we spoke about the realities of life there, he thanked us for our work and also for the gift that I brought him, which was incense – and he told me that the incense from Somalia was very good!”, the bishop explains, laughing. “Now we are looking forward to the ad limina visit.”

The international Catholic pastoral charity ACN has helped for various projects, both in Somalia and in Djibouti, over the years – for example with the translation and publication of various religious books, including the catechism. “I am very grateful to ACN. We have had a very good working relationship for many years now”, says the bishop of Djibouti.