As the economic and social situation in Venezuela continues to deteriorate day by day, even basic necessities are no longer available.  The country has run out of most medicines from common painkillers to cancer and HIV drugs. Desperate doctors have resorted to using veterinary medications instead but even these are now in short supply. 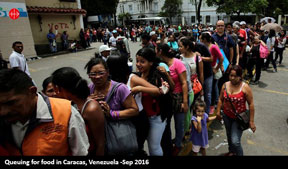 Bishop Jaime Villarroel of the Diocese of Carúpano told the Catholic charity Aid to the Church in Need:

“The children especially are suffering from malnutrition. The food rations are supposed to be enough for a month, but they don’t even last a week. The people are fainting from hunger. Famine reigns, which used to be unthinkable for Venezuela. We no longer know what to do or to whom we should turn. The police and also the politicians are often corrupt. We feel forsaken.”

The situation is made all the more difficult as the government continues to deny there is a crisis and instead tries to attack the Church which is active locally and tries to help the poor. President Maduro has so far refused help from international charitable organizations, including the Vatican-sponsored Caritas Internationalis, which has tried to send medicine and food through different affiliates.

Catholic bishops have urged the  President to accept humanitarian aid. “Denying that there’s a crisis and refusing to let the world send medicine and food is not possible,” said Cardinal Jorge Urosa Savino, archbishop of Caracas.

Several priests from the diocese of San Cristobal are calling for the establishment of humanitarian corridors to relieve the suffering population. On a visit  to the Rome headquarters of Aid to the Church in Need, Father Erwin Guerrero reiterated the urgent need to alleviate the suffering of the Venezuelan population. “You have to set up a humanitarian corridor as soon as possible” he pleaded.

As Venezuela teeters on the brink of economic and social collapse, dozens of local women are opting for sterilization. The Miranda clinic in Caracas is now sterilizing 40 women during its weekly “sterilization day” and has a waiting list of 500.

“People are so hopeless they would rather render themselves incapable of having children than risk bringing the children into the world. That is a working definition of hell on earth,” stated Ezra Levant of TheRebel.media.

Bishop Jaime Villarroel said it was the Church’s “job to be there for our people and to relay a message of trust in God. Pastoral visits are a source of great strength in this terrible situation.”

Although only two percent of the people go to Mass in his diocese Villarroel said Catholics must try to persevere in a “culture of survival.” Churches have been violently attacked there has been an escalation of street violence that hitherto had mainly taken place at night. The Venezuelan Bishops Conference issued a statement confirming that four seminarians and another student were beaten last July in broad daylight by a pro-government mob. Archbishop Porras said “these anti-socials acts [occur] with total impunity, because here there’s no police or National Guard to stop these events.”