BOSNIA “We are there for the children that need us.” – Rolf Bauerdick,

BOSNIA –  “We are there for the children that need us.”

When Katarina leafs through the photo albums from the last two decades with Sisters Admirata and Manda, her joy is tinged by melancholy. The photographs keep memories of Katarina’s happy childhood days alive. However, the realisation that the sheltered days of her youth will soon be over is ever present. Katarina is the oldest child at the “Egipat House” orphanage of the religious order Sisters Servants of the Child Jesus. Her parents were refugees during the war in Bosnia, uprooted, psychologically ill and no longer able to manage day-to-day life. They did not take care of Katarina and her older brother Stipo and left them with their grandmother. “The old lady was completely overwhelmed by the task of raising them,” Sister Admirata recalls, “and so we took the siblings in here.” Katarina was two years old when she came to live with the nuns. Now she is nineteen and getting ready to leave the familiar home. “I am a little nervous how life will be outside of the home,” she says. Sister Admirata reassures her charge. She knows, “Katarina is well-equipped for the grown-up world.”

Admirata Lučićis the provincial superior of the religious order, which runs an orphanage and a kindergarten at its convent in the Bosnian city of Sarajevo. In the hall of the facility, a life-sized painting commemorates Archbishop Josip Stadler (1843 – 1918), to whom the convent owes its existence and its spiritual foundation. Josip Stadler not only founded the religious order in 1890, but also made himself the advocate of neglected children in need by founding exemplary orphanages. At the time, the nuns chose to give their convent the name “Egypt” to recall the flight of the Infant. 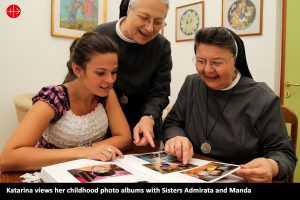 Today, the sisters can look back on a history that was both rich in blessings, but also tempestuous, and one which, completely in contradiction to the benign spirit of Josip Stadler, was also quite often shaped by destruction and hatred. The order was expropriated in 1949 under the dictatorship of the Communist party in the Federal People’s Republic of Yugoslavia. The convent building was confiscated, the children were taken away from the nuns and placed in state-run facilities. “Faith no longer played a role in the upbringing,” Sister Admirata says. “You were no longer allowed to speak to the children of and about God.”

In 1992, at the beginning of the Bosnian War, the Serbian military bombed the building into the ground. However, it rose again from out of the ruins. Admirata and her twelve fellow nuns, who are assisted in their everyday lives by Aid to the Church in Need (ACN), are happy to have founded the first post-war orphanage in Bosnia in 1999. Today, 55 boys and girls attend kindergarten there, while 19 children live full-time at the orphanage. Children who have lost their parents, or whose father and mother are unable to exercise their parental responsibility, have found a home there. Sister Admirata says, “However, we do set great store by the fact that our kindergarten children not only come from difficult social environments, but also from intact backgrounds. We also have children of diplomats and of middle-class families here.”

Katarina’s brother Stipo has already left the orphanage. He trained to become an auto mechanic and is now working for a church agricultural project in the Čardak region. After nine years of schooling, Katarina has also completed training to become a sales assistant and window dresser. “I hope to find a good job.” Her chances of finding work are good. The nuns are currently helping the young woman find an affordable place to live in Sarajevo, which is not an easy task. However, Admirata exudes confidence, “We will find a solution together.”

Two Muslim children have newly arrived at the orphanage: the seven-year-old Melissa and her brother Omer, who is one year older. Their mother moved away, leaving the two alone. Their father took another wife. The siblings remained behind with their grandfather. Overwhelmed by the task of raising them, the old man went to the Servants of the Infant Jesus for help. And not in vain. Today, Omer and Melissa are attending first grade at the Catholic primary school and are positively flourishing in terms of their development.

By accepting Muslim as well as Orthodox children at “Egipat House”, the nuns are acting in complete accordance with the philosophy of the founder of their order. Josip Stadler was esteemed as the “Father of the Poor” by people of all religions and denominations. The Servants of the Infant Jesus also do not divide up the children by religious affiliation. “We are there for the children that need us,” Sister Admirata says. Two days later, the children are all at Sacred Heart Cathedral in Sarajevo with the nuns, attending the ordination to the priesthood of eight young men. They cannot hide their joy, because they already knew some of them as seminarians.

Aid to the Church in Need supports the nuns of the Servants of the Infant Jesus in the training of their novices. Last year, the aid organisation also helped renovate two convents of the order that had suffered severe damage during the flooding in Bosnia.