UKRAINE: “Thank you for staying with us”

With the war entering its eighth month, pontifical foundation Aid to the Church in Need (ACN) spoke to Vasylij Tuchapets, Greek Catholic Bishop of Kharkiv, during a visit to the headquarters of the charity, about the importance of remaining with the people, how the war has affected pastoral work, and the needs in eastern Ukraine as winter approaches.

On the first day of the invasion, Bishop Vasylij woke up at 5.00 a.m.  to the sound of explosions as the Russians began bombing Kharkiv. On the way to the cathedral, he saw people in panic, many trying to get to the station with their luggage. City transport was not functioning and there were long queues at petrol stations.

His first instruction that day was that all priests should remain in their parishes, close to the faithful entrusted to them. At the same time, the safety of their families required care and attention, since most Greek Catholic diocesan clergy have wives and children.

One evening after Mass the bishop was leaving the cathedral when he was approached by a group of local young men, who he had never seen in church. “Thank you for staying with us”, they said. The very presence of someone praying for them lifts people’s spirits, says Bishop Vasylij: “One should not be afraid, and the Lord will bless. If a priest runs away, everyone loses.” 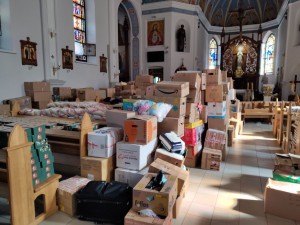 The Cathedral in Kharkiv filled with boxes of relief supplies and food. For the first months of the war the Cathdedral was converted into a warehouse. The humanitarian aid was delivered to the whole diocese from here.

“We plough, others will reap”

The Diocese of Kharkiv, which was only created in 2014, is spread over 84,000 square kilometres – roughly the size of Austria – and includes the three regions of Kharkiv, Poltava and Sumy, with a total population of more than five million. This traditionally Orthodox area was heavily secularised during Soviet times. “We started our work with our Greek Catholic Church faithful, made up mostly of former university students who remained in Kharkiv, and by former deportees to Siberia” says the bishop, “but now most parishioners are locals who have found their faith through contact with our parishes. I think our task is to plough, to prepare the ground, after us come those who will sow, and the next generations will already reap, as St Paul said.”

Pastoral care is changing with the war, notes Bishop Vasylij. Many people left, but new people have also arrived, seeking help and shelter. People come to Kharkiv Cathedral every day, not only for humanitarian aid. They have questions and are looking for answers. “Most of the people who come to pray now are those who started coming during the war. Sometimes, after years of living together, they ask for marriage or for baptism for their children”, he explains. 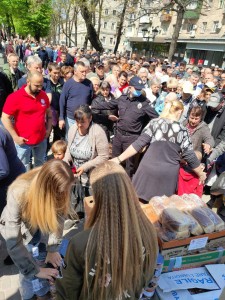 Children also come to the Church, often after spending months holed up in their homes, or in basements and shelters. The sisters and animators organise games, competitions, meetings and catechism twice a week for those who are willing. For some, it is their first contact with prayer. “School classes are online for security reasons, so we will continue our meetings for children,” says the bishop. Pastoral work with children includes summer camps, called “Vacations with God”, which take place thanks to ACN support. During the war the camps were not only maintained, but the number increased.

Parishes prays every day for an end to aggression, and for peace. “As Christians, we know well that strength is given by the Lord and not by the numbers of the army,”says the bishop. The cathedral also holds daily Liturgy in the lower church, as the upper church is used as a warehouse for humanitarian aid.

Winter will not be easy, aid is still needed

Aid began to arrive in Kharkiv soon after the war began. Over time, the priests and volunteers became adept at sorting food, clothing, hygiene products, children’s goods and so on, so they can quickly give people what they need. Between 1,500 and 2,000 people still come to the cathedral for aid, from all over the city, because here they can get various items in one place.

Aid distribution has decreased, however, from three days a week to one, partly because of scarcity of goods, but also to store supplies for the autumn and winter, for new refugees. The local villages have been heavily damaged by Russian shelling, so people seek shelter in the city.

Damage in Kharkiv itself is quickly repaired, and infrastructure is up and running, but this winter will not be easy, warns the bishop. Many buildings have broken windows from shelling, so the first task is to ensure that people can keep warm in their flats. Food, warm items and medicine are still needed, the latter being a priority, as the cold weather will be accompanied by seasonal diseases. “We still need help for people and this need will continue for a long time, because people now have no work and no income, so we must provide at least basic things,” Bishop Vasylij states.

ACN was the first charity Vasylij Tuchapets visited after being named Bishop of Kharkiv in 2014. Over the years the diocese and ACN have set up many projects, including the ongoing construction of the cathedral and other churches, parish centres and infrastructure, support for priests and sisters, catechism projects and work with children and youth.

Speaking to all ACN benefactors, Bishop Vasylij says: “Thank you for your support and cooperation! This is how we spread the Word of God in the east of Ukraine, where it was forbidden during almost 80 years of communism. The revival of the faith needs a lot of time and a lot of work, starting with the basic structures that will provide a place for prayer and catechism and the possibility for priests to live close to their people. Every one of our priests celebrates Mass at least once a month for the intentions of our benefactors. I thank you for this cooperation and hope that it will continue. May the Lord bless you for your ministry, which is so important for the Church!”