HAITI: Churches and institutions attacked as the country suffers violence

“The Church has become a victim of the violence”, says Sister Marcela Catozza, a missionary in Haiti. The Italian nun claims that the situation has taken a turn for the worse since June, with churches and institutions coming under attack.

The small Caribbean state of Haiti is going through a period of terrible violence. With the office of President vacant since the murder of Jovenal Moïse in July 2021, and no date set for new elections, the struggle for power and the lack of effective leadership have led to protests, chaos, and extreme violence in the streets, in a country already beset by poverty and natural disasters. 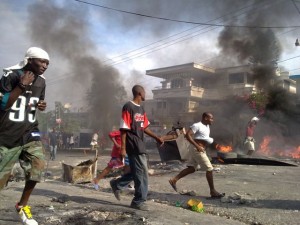 “It is horrible, and it is the people who suffer most. The city is in the hands of gangs. The people are hungry, schools are closed. There is no work, hospitals are closed because they have no fuel for their generators. It is impossible to live in these circumstances”, Sister Marcela describes, during a conversation with international foundation Aid to the Church in Need (ACN).

What is more difficult to accept, however, says the nun who has been in Haiti since 2006, is that the world doesn’t seem to take notice. “The worst is that nobody speaks about us. Nobody knows what is happening, they don’t care about our suffering in this country”.

“The Church is also being attacked”, says the missionary. On 25 June 2022, Sister Luisa del Orto, another Italian nun who had been living in Haiti for 20 years, was gunned down. “We were very, very close. The news brought me to my knees, it was such a terrible loss”, she recalls. “We don’t know why she was killed. At first, we were told that it was an attempted robbery, but I am convinced that somebody paid to have her killed in the street. It was truly awful”, she says, her composure in contrast to the situation she is describing.

Only two weeks later the Cathedral in the capital of Haiti was also attacked. “They set fire to the cathedral and tried to kill the firefighters who arrived to put out the flames. Afterwards they tried to destroy the walls of the cathedral with a truck”, says the nun, who belongs to the Franciscan Missionary Fraternity, during her conversation with ACN.

However, the attacks on religious buildings and organisations have not been limited to the capital, Port-au-Prince. “In Port-de-Paix and Les Cayes, and in other cities, they attacked Caritas buildings, taking everything, including all the humanitarian aid, and destroying the staff’s offices”. 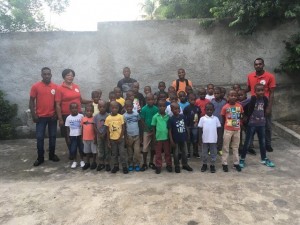 Since August she has been in Italy, and the great increase in attacks has kept her from returning to Haiti, a fact that fills her with sorrow. “I was told I better wait a bit before returning. Partly because they killed Sister Luísa two months ago, and they don’t want another martyr nun in the country. So, I have been waiting. It is very difficult for a missionary to be away from their mission, it is very hard. But I am sure that this is what God is asking of me now.”

According to the sister, the situation is indescribable, gets worse by the day, and has also affectedher mission, an orphanage in one of the most dangerous slums in the world. “Around a month ago they set fire to our chapel. Everything was burned. The altar, the pews… There is nothing left. The Blessed Sacrament was saved because I always take it somewhere safe when I leave.”

The conditions in which she lives when in Haiti are incredibly difficult. The slum began to be built 20 years ago, on the site of the capital’s rubbish dump, and it is now home to over 100,000 people who live in zinc-covered huts with no running water or electricity. Sister Marcela is the only nun in the mission at the moment, as the other Sister who started it with her had to return to Italy following the severe shock she suffered during the 2010 earthquake, when they lost everything.

“For the past year I have been unable to leave to go to Mass in the morning, because the gangs close down the slum and nobody is allowed in or out. This is very difficult for me, very difficult”, she explains.

“It seems like nobody in the world is interested in what Haiti is going through. Of course, there are plenty of other problems in the world, especially in Europe, which is focused on what is going on in Ukraine and Russia, and gripped with fear. But you should not forget the other places in the world, like Haiti, which have been enduring conflicts not just for some years, but all their lives.”

Sister Marcela ends her conversation with an appeal to ACN benefactors. “Please pray for Haiti. Let us ask the Lord to watch overall the Haitians, and to give peace to his people. Pray for my children, all 150 of them. The smallest is two months old, and the oldest is 18. The way Haiti is at the moment, there is no future for these children. Let us pray to God that the good he has planned for them may come to fruition, and that the wishes they have in their hearts might come true”, she pleads.