UKRAINE: From contemplative silence to hosting and helping refugees

Aid to the Church in Need (ACN) has just approved an emergency relief package for Latin Rite female congregations involved in charity work in the Archdiocese of Lviv in Ukraine, such as the Benedictines of Solonka, who opened the doors of their contemplative monastery to assist refugees. 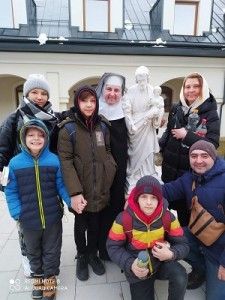 The contemplative Benedictines are used to silence and external solitude, but they have opened the doors of their monastery and their cloister to host people affected by the war. Since the end of February 2022, the nuns estimate that they have helped more than 500 needy people through their monastery. It was mostly women and children. “Currently the monastery mostly hosts those who do not plan to go abroad, and others who don’t have a home to return. Now we have 75 people here, including the sisters from our community in Zhytomyr,” says Sister Klara.

The Benedictines of Zhytomyr were finally forced to evacuate their convent after spending several days in air raid shelters in the basement of the local cathedral, as their building was under constant threat of bombardment.

To help people overcome these difficult and traumatic times, the nuns involve everyone in the daily chores and services, such as preparing food. One of the cells has been turned into a playroom for the 20 children who are staying there.

Roman, Anna and their two children, a month-old baby and a seven-year-old boy, are one of the families currently living there. They had already packed their bags and were in their hallway when a rocket hit their building. “The house caught fire, all the windows were blown out,” said Roman. The neighbour’s house had also been hit, causing even more damage.”

Out in the street, people were running in all directions to get as far from the house as possible, fearing the gas pipes might explode. Roman and Anna took their children and their bags and started walking. Eventually they waved down a car that drove them to the house of a friend’s mother. “But there were bombings there as well, especially at night. It was awful. We couldn’t sleep and the kids were getting nervous,” Roman explains. 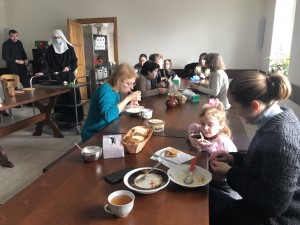 They decided to head to Lviv by train with other refugees. When they arrived, they realised that the city was overcrowded and there were no rooms available. With growing frustration, they were going from one place to the next, but nobody was able to help. Finally, they sat on a bench, completely worn out. The baby was very cold.

That was when a nun came up to them and asked: “Do you have a place to stay? Is anybody expecting you?”. They

replied in the negative and the nun suggested they go to the monastery, where they were given a clean room, food, clothes and powdered milk for the baby. “We will remember this moment, and be grateful for the rest of our lives.” Later they learned that Sister Hieronima, the nun who offered them help, had not planned to go by the train station that day, but felt that she should, to see if anybody needed help.

Stephen Axisa, national director of ACN’s Malta office, said: “As a voluntary organisation (VO/2227), we are appealing to the Maltese and foreigners living in Malta to support our Ukraine Help Campaign through their donations. The above testimonial is just one of thousands that have been recorded by our already-established network in Ukraine. The financial support that ACN has been sending is the fastest and most effective way to get what is needed to these refugees without any delays. It also supports the remaining economic activity in that country and, together with financial support from other international organisations, so far is avoiding a total collapse of their economy,” explained Mr Axisa.

Further information may be obtained from ACN (Malta) https://www.acnmalta.org/ukraine/, by calling +356 2148 7818, or via email: admin@acnmalta.org