SYRIA -“The country is destroyed” – interview with Fr Halemba

Father Andrzej Halemba, the Director of Projects in the Middle East International for Pontifical Foundation Aid to the Church in Need (ACN), recently returned from a trip to Syria. In an interview with ACN he talks about the current situation in this war-torn country. 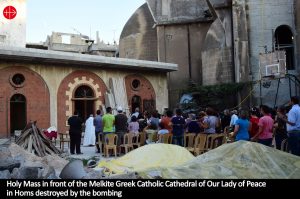 How is the situation in Syria right now?

Currently, everyone is waiting for on the one hand, the situation looks promising; but on the other hand, we are facing a humanitarian crisis of enormous dimensions. For this reason, people say: “OK, we hope, we experienced some peace again “; but this peace, of course, is not complete. For example, during my trip in Damascus there was quiet for two days, but on Sunday there were eight explosions again on the outskirts of the city. DAESH, Al Nusra and other followers of Al-Qaeda want to destabilize the situation, to show that without their participation there will be no peace in Syria.

Syria has completely changed in just five years, from being a rich country where there was peace and where the economy worked very well to become a country that is completely destroyed.

How has the war affected the life of the people of Syria?

Syria’s population fell from 24.5 million to just over 17 million currently. Nearly six million people live outside the country. In neighboring countries there are more than 4.8 million Syrian refugees; and 13.5 million people Syria need humanitarian aid. Many regions are difficult to access. Food is very expensive; for example, in the area controlled by the Government, the price of rice has increased since 2010 by almost 250%, but in the areas dominated by the rebels, this price has multiplied by 28! One can imagine the misery they suffer when prices of staple foods are so astronomical. More than 57% of the population cannot find jobs. They survive by begging and humanitarian aid. 4.6 million people live in hard to reach areas. Everyone is afraid that the country will be divided and that the conflict will be prolonged owing to new factors such as the action of the Turkish army in the territory of Syria against the so-called rebels and against the Kurds. The situation is extremely complex, but for the first time in several months there is a little hope.

What experiences have especially shocked you during your trip to Syria?

First, the ruins that can be seen around Damascus. It is such a beautiful city that people are reluctant to leave despite the difficult situation in which they are trying to live a “normal life”. But the appearance of the landscape on the outskirts of the city is horrible. To go to Homs you have to use secondary roads because the main road is lined with snipers. The streets are dirty, people are poorly dressed, prices are very high and there is a lot of mistrust. The growing number of checkpoints has definitely made an impression on the minds of people; they said: “We are constantly in danger because there are soldiers everywhere who control everyone and all cars”. Because of the constant pressure caused by bomb attacks everyone is extremely tired, especially the police.

In Homs we went through a square where a few days earlier there had been an attack by Al Nusra. The attackers drove a car to the city center and blew up a bomb at the checkpoint, killing themselves and six soldiers. Because of this terror, people are deeply traumatized. “We’re never sure” they say. And that really makes a dent in them.

Families are in a desperate situation because they cannot sustain themselves. No work or, if there is any, it is very poorly paid. And the displaced persons who have left their homes – 6.5 million to be precise – have to rent rooms; but rental prices are extremely high. Young people are really afraid that they will be made to enlist in the army or join the rebels to fight. They are the most vulnerable, which is why they leave. This is why the vast majority of refugees in Europe are young people.

Are there also situations that you could describe as positive?

The moment when they come and tell us: “We cannot thank you more” or, in many cases, when they grieve without words because no one helps in them the way they need; this has a strong emotional impact on us. They are very grateful. But aid does not just have a material aspect. It gives much more: strength through the gesture of solidarity they experience. In Marmarita they told me: “Father, for us it is very important not to feel forgotten.”

We must remember that ACN is one of the largest agencies providing emergency aid in Syria, especially for Christians. According to statistical analysis, ACN has assisted 195,000 Christians and others. Aid is provided for them in the form of food parcels, electricity, gas, medicine, scholarships. We were able to identify 17 different forms of aid that were provided to the Syrians in 2015. I always ask the people of Syria to pray for the benefactors and their families. I said, “pray every day for them.” Indeed, they are doing so : often they pray the rosary together in churches, or individually. It is an exchange of love across the bridge of prayer.

Is there any history of project partners wanting to have?

There is a professor of Damascus. He went abroad twice, once to the United States and another time to Europe. He said: “I cannot live outside here. I have to return to Syria; I have to help children in schools. I want to become old here and die here.” This is a person who really loves his country despite the difficulties and despite the temptation to lead an easy life.

I also remember two young Christians from the Valley. They are well educated and speak English very well. With his qualifications it would be very easy to find work in Western countries. In addition, her parents live in the United States and tell them that they should go too; but they have refused to leave. They said: “We have to help others. There are many who depend on us. ” They are effectively helping several hundred families as volunteers. This is wonderful.

Since the beginning of the war in Syria, which erupted in 2011, Aid to the Church in Need has funded humanitarian projects and pastoral emergency aid in the country totalling more than 13 million euros.