SYRIA: Pilgrimage of the icon ‘Our Lady of Sorrows, Consoler of Syrians’, blessed by Pope Francis, comes to an end

Thursday 15 September, Feast of Our Lady of Sorrows, will mark the end of the “Console your People” initiative, to beg for peace in Syria and for the protection of all Christians in that country, which was promoted by pontifical foundation Aid to the Church in Need (ACN).

The idea received the support of Pope Francis, who on 15 September 2019 blessed the Icon of ‘Our Lady of Sorrows, Consoler of the Syrians’, to be sent on pilgrimage to the 34 Catholic and Orthodox dioceses of Syria.

Three years later the peregrination will reach its conclusion during a procession through the city of Homs, which suffered terribly in the first years of the war. 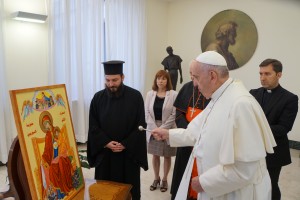 Our Lady of Sorrows Consoler of Syrians

The official programme will begin in the Syriac Orthodox cathedral of Al Zinnar and end with a liturgical celebration during which the different Christian denominations will pray together in the Melkite Cathedral of Our Lady of Peace, which was rebuilt thanks to support by ACN after peace returned to the city.

The celebration will be attended by Melkite Archbishop Jean-Abdo Arbach, Syriac Orthodox Archbishop Timothius Matta Alkhouri, Greek Orthodox Archbishop George Abu Zakhem, and Syriac Catholic Archbishop Rami Kabalan. ACN will also be represented in Homs by, among others, Executive President Thomas Heine-Geldern and Father Andrzej Halemba, former project director for the Middle East, who came up with the initial idea for the pilgrimage. Father Spiridon Kabbash, the Greek Orthodox priest from Homs who was entrusted with writing the icon especially for this occasion, will also be in attendance.

The next day, 16 September, the icon will be taken to the monastery of Saint Elijah, in Rableh, where it will be enthroned. Over one thousand pilgrims are expected to attend. During the ceremony the president of ACN will place at the feet of Our Lady a book with a list with the names of the 1,271 Christians who were killed in the war between 2011 and 2022, according to data collected by Father Andrzej Halemba for ACN.

The final ceremony of the pilgrimage had to be postponed several times due to the pandemic. During this time the icon was safeguarded in the Carmelite Monastery of Aleppo.

The Syrian War has been going on for close to eleven and half years, and has caused at least 6.7 million internally displaced people, and another 6.6 million refugees, according to UN figures.