UKRAINE: Without vehicles there is neither aid nor hope

Stradch is a small village of 3,000 people, located around 25 kilometres from Lviv, in Ukraine. The village is home to a Marianshrine and is also where Fr Mykola Konrad and lay catechist Volodymyr Pryjma were martyred. Last October, the Archbishop of Lviv consecrated the newly built Pilgrim House. From the very beginning of the Russian invasion, this house opened its doors to refugees from the war zones, and over the past six months it became home to more than 350 people. Today, it is still full to capacity, hosting 50 people, including 19 children, between the ages of 16 and six months.

Without a van, securing the needs of the refugees is simply impossible, but unfortunately Father Ivan Koltun, the shrine’s custodian, did not have a car until now. When refugees arrive at the train station they need to be picked up, and when they decide to return to their own homes, they have to be taken to the station with their belongings. Once they have settled in, the new arrivals need help to obtain all the necessary documentation, which means traveling to the city of Yavoriv, which is another 35 km away. Furthermore, feeding the 50 residents requires making large purchases of food, which means almost daily trips to Lviv.

In the future, the Pilgrim House will not only welcome group retreats and pilgrims but will also provide psychological rehabilitation for those affected by the war. Thanks to the help provided by ACN benefactors, Father Ivan has just received the necessary funds to purchase a car, so that he can better serve those who need it.

Another example of ACN’s activity in this field includes help to buy a car for the small community of Pallottine priests in Bilohirya, in Central Ukraine. The small town had a population of around 5,000 before the war, but the priests also serve a small neighbouring parish in Yampil, 20 km from Bilohirya.

However, there are currently about 2,000 refugees in the region of Bilohirya, and so, during the current conflict the priests have opened their monastery to the internally displaced. Over 500 have already crossed their threshold. At the moment the monastery hosts 17 mothers, and their children, who have nowhere else to go.

Since 2012, the priests, together with the Benedictine Missionary Sisters, have operated a home for 10 children whose parents were deprived of their parental rights. This activity requires transportation, as it is often necessary to travel with the children to a specialist doctor, or to go to the centre of the region, the city of Khmelnytskyi, almost 100 km away, to deal with paperwork. A 12-year-old boy from Konstantynivka (Donetsk Region), who lost his parents in the shelling, arrived with the new wave of refugees and has found a new home with the other children.

And if all this wasn’t enough, the community’s superior, Father Pavlo Goraj, is also the chaplain of an NGO that provides rescue services, and often travels to villages and towns closer to the frontline to provide pastoral and humanitarian assistance to residents, especially children and young people. 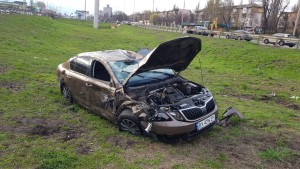 In April, returning from a trip to Slobidka (Chernihiv Region, 570 km north-east of Bilohirya), which until recently saw heavy fighting, the Pallottine’s car was involved in an accident. The car was damaged beyond repair, and the perpetrator fled the scene. In war time, legal proceedings and insurance payments are greatly delayed, and because it was the priests’ only car, they urgently needed help. Therefore, this community has also benefitted from ACN’s financial support.

Aid to the Church in Need (ACN) has provided  emergency aid and other initiatives to support the work of the Catholic Church, of both rites, in its gargantuan effort to remain beside its flock in Ukraine, during the first five months of the war. This aid includes 600,000 euros for the purchase of 29 vehicles for pastoral and humanitarian work. The daily life of many people – parishioners, children, displaced, and those who need constant support and humanitarian aid – now hinges on transportation. This is, therefore, a form of aid that does more than provide hope, it saves lives.