The international Catholic pastoral charity and pontifical foundation Aid to the Church in Need (ACN) has approved a number of further projects aimed at continuing its ongoing support over the next few months for the most needy families in the various towns and cities of Syria. A special focus of this aid is Aleppo, which is currently on the front line in the battle between the government army, which controls the western part of the city – once the commercial and industrial capital of Syria – and the rebel groups, who still hold the eastern part and also control the water and electricity supply to the city. At the same time ACN has promised to renew its support for the families of the internal refugees within Syria, in such cities as Damascus and Tartús. 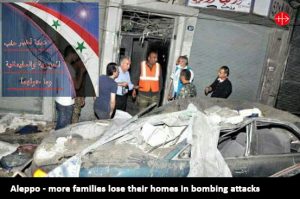 The number of Christians in the conflict zone has fallen yet again in the last few months, but at the same time the number of families in need of aid for their basic survival has grown very rapidly. Most of the promised aid represents a continuation of emergency aid programmer already established, with the difference that the number of those in need of aid has increased yet again, as a result of the worsening of the situation in almost every part of the country.

ACN will continue its aid for 2,817 families in Aleppo and Al Hassakeh, where for more than five years now the people have been facing every kind of hardship, suffering and fear. The organists of the aid on the spot have written: “Because of your help we are able to stand beside our people and help them, making their burden lighter. We continue to work as a team and, with your support, we are trying to keep in contact with an ever increasing number of families and secure for them, as far as possible what they need to live with dignity. We need to support them in their daily life, specially those who have children, and the elderly, because they are the most vulnerable. Life has become very costly and tough. Our families struggle between fear and anxiety about the future. The constant question people keep asking themselves is whether or not to stay, and what our ultimate fate will be.” 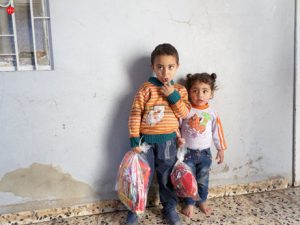 According to the FAO more than three in every four Syrians today are living in extreme poverty, unable to buy the basic necessities and foodstuffs for survival. In the past 18 months the cost of fuel has more than doubled. Wheat flour has increased in price by some 300% and rice by around 650% in comparison with the prices before war broke out.

Included in the aid promised for the next few months is the supply of baby milk and nappies for some 650 babies and children of two years and under in Tartus and other places within the diocese of Latakia. Thanks to the generosity of many benefactors, the charity was able to help some 200 babies at the beginning of this year. Along with the request for further help, ACN has received a message of the project responsible, describing how “the parents were delighted to feel that they are not abandoned by God.” And further: “You have been the visible image of the invisible God. Your aid relief gives always a moral boost to families in the doldrums, who might otherwise feel having a baby is a burden instead of feeling happiness and joy.”

At the same time ACN is hoping to extend its aid to the uprooted families from Aleppo, Hama and Idlib, most of whom have whom have resettled in Tartus and Latakia and now need help to be able to pay the rent. Until a few months ago there were 100 families here receiving support, but the violent clashes in Aleppo and other parts of the country have now resulted in the number of uprooted families in the diocese jumping to 450, all of them in great need. And 507 families who have fled to Damascus have also appealed for urgent help to pay their rent, as well as for medical treatment, clothes, schooling and food.

These are just some examples of the kind of emergency aid that ACN has been giving and intends to continue giving to support the people and the local Church in Syria. Altogether ACN is now committed to seeking over 1.5 million Euros in order to be able to ease the sufferings of the Syrian people over the next few months.