A court in Khartoum, capital of Sudan has sentenced Petr Jasek, a Czech humanitarian worker and missionary, to 20 years in prison. The court found him guilty of crimes including espionage and inciting hatred. 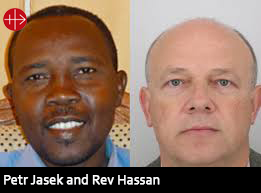 Jasek was originally facing the death penalty but his life was spared following an international campaign a few months ago which included an online petition that gathered almost 400,000  signatures worldwide.

Two Sudanese men who were accused alongside Jasek were also found guilty. Hassan Taour is a religious leader in Sudan and Abdulmonem Abdumawla is a graduate who lives in Darfur. Both have been sentenced to 12 years for “ helping Jasek with his espionage work.”

In addition, the courts have condemned these men for circulating rumors that threaten to undermine the authority of the government, a crime that is punishable by a legal maximum of 6 months. The court, however, sentenced them to one year under this charge, twice the legal maximum.

The ruling came as a shock to Jasek’s friends and family. The Minister of Foreign Affairs of the Czech Republic, Lubomir Zaoralek, stressed that the release of the Petr Jasek “is a priority.“ He stated that the sentence “is unjust” and that Jasek was sentenced without any evidence. Jasek’s legal team is currently investigating all possible means to get the ruling overturned.

Following the Khartum court ruling, human rights activist group Citizen Go has created another online petition asking Sudan’s President, Mr. Omar Hassan al-Bashir, to free Jasek. The petition is also being sent to the embassies of Canada, the United States, the Holy See, Russia, and the United Kingdom in Khartoum asking them  to actively encourage Sudan’s President to free Petr Jasek. International pressure on the Sudanese government is essential to ensure that Jasek is granted amnesty.

We must act now to ensure the release of Petr Jasek and the two Sudanese men who were charged with him.