Pope Francis himself recently declared that there are now more martyrs than in the first centuries. One of them is the Indian Christian Bartu Urawan, who preferred to endure torture that led to his death rather than renounce his faith.  This is the latest episode of violence by Hindu radicals against the Christian minority in India, where the constitution guarantees freedom of worship but this is being increasingly violated. 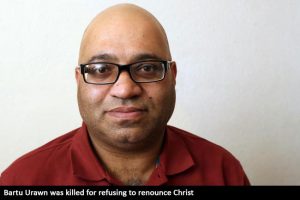 Bartu Urawn, 50, who lived in the village of Kubuaa in  Palamu district with his wife and his son Beneswar, died a few weeks ago after suffering brutality for three years from neighbours.

Bartu and his family had converted to Christianity about ten years ago, along with 9 another families from the village. “We lived in utter poverty and did not have food for a single meal. We were completely broken as a family after we lost my elder sister, elder brother and younger brother one after the other. It was then the gospel was preached in our village,” said Beneswa. After converting to Christianity“ we had food to eat, health in our bodies and above all peace in our heart”  he added.

Gradually the villagers noticed that the lives of the 10 Christian families began to improve  and they began to persecute them. Villagers used discrimination and harassment to force these families to return to ‘Sarna’”, or “the religion of sacred trees” – an ancient ritual common to Hindu mythology, Buddhists and Jains, which also carries out animal sacrifice. After receiving daily threats, seven families could not stand the intimidation and returned to their previous faith.

The villagers now turned their attention to the Urawn family.  A mob assaulted Bartu, his wife, Beneswar, Beneswar’s wife and Beneswar’s younger brother and locked them inside their own house for several hours. They deliberately polluted the area from which the family fetched their drinking water. Later, they caught hold of Bartu and made him attend their worship, during which they sacrificed an animal. They forced meat from the sacrifice down his throat and made him drink fermented liquor.

When it became clear that the Urawn’s faith did not waver in spite of threats, assault and being ostracised, the villagers tied Bartu and his wife’s hands behind their back and immersed them in a freezing pond with only their heads above water for 17 hours. Beneswar, who was forced to watch his parents’ torture relates:

“Throughout the night they were in the cold water shivering and I along with 15-20 villagers were witness to the brutality. The villagers kept asking my father if he was ready to forsake Christ and return to the Sarna fold. He reiterated every time, ‘I will not deny Christ….I will continue to believe till my last breath’.”

Next morning Bartu and his wife were pulled out of the pond and hit. They both fell seriously ill as a result of their ordeal. Bartu’s wife eventually recovered but Bartu suffered repeated cardiac arrest, became paralysed and died.

To add to the trauma the family faced, villagers threatened Beneswar and would not him to bury his father unless the entire family returned to their ancestral faith. Eventually, Beneswar along with four Christians walked with the dead body of his father for 10 kilometres on 21 January until he could perform his last rites on government land.

After they returned from the funeral, the villagers demanded that Bartu’s wife should serve food to the entire village according to Sarna rituals. Beneswar refused to abide by those traditions insisting that as Christians they would hold a prayer meeting.

“The villagers said that they will kill us just like they killed my father,” said Beneswar.

The Urawn family fled for their lives and took refuge in a village 35 kilometres away. They approached the police.

“The police did nothing about the murder of my father calling it a ‘natural death’ but invited the villagers on 2 February for ‘peace talks’ and instructed them to not trouble us further, as faith is our personal matter and we are free to believe whom we want to,” revealed Beneswar.

The Urawn family is back home and continue to move on in their faith amidst trials.

Among the major tribes, 56.6 per cent profess Sarna Dharam, 39.8 per cent are Hindus, 14.5 per cent are Christians and 0.4 per cent are Muslims. According to Aid to the Church in Need’s  Religious Freedom in the World Report 2016, minority rights are seriously threatened  in India and many are persecuted because of faith.