For almost 30 years now, in accordance with the heartfelt wish of Pope Saint John Paul II, ACN has been helping to promote fraternal dialogue between the Catholic Church and the Russian Orthodox Church. The historic meeting between Pope Francis and Patriarch Kirill of Moscow in February 2016 in Havana, Cuba, further opened the way to new ways and paths of dialogue between the two communions.

Sponsored by ACN, an ecumenical working party was established, tasked with the concrete implementation of the shared concerns of the two Church leaders. One of these areas in which the two sister Churches were able to intensify their collaboration was the joint support for families, pregnant women in conflict situations and victims of domestic violence. Thus, for example, in the eparchy of Nizhnij Novgorod ACN helped for the establishment of a refuge for young mothers in need.

Similarly, in Velikij Rostov, and with our support, the Orthodox Church is helping women in need – above all the victims of domestic violence and human trafficking, and migrant women as well. Up till now between 300 and 500 women have been counselled and helped annually by a six-person team of trained female counsellors. 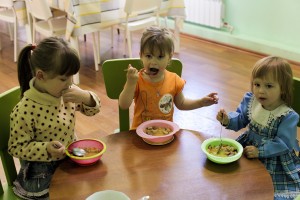 At the same time three or four women can be accommodated, together with their children, in temporary accommodation – though needless to say, the need is much greater than this.

Hence the plan is to extend the available accommodation, so that up to 16 people can be given refuge for a limited period of time. At the same time the women are registered with the authorities, so that they can also look for work. Then as soon as they have managed to get their lives back in order and stand on their own two feet, they leave the centre and make room for other women in need. Equally important is the pastoral accompaniment offered, which is available to all the women, regardless of their religious faith or denomination.