A Combonian missionary nun living in Wau, South Sudan, believes the upcoming visit by Pope Francis to the youngest country in the world, scheduled for 5-7 July, could have an historic effect on the peace process.

“The Pope will play a very, very important role. The Pope, the Christian churches and all the local Christian leaders. We all have a very important role to play at this moment in the history of South Sudan”, says Sister Beta Almendra, speaking to Aid to the Church in Need (ACN).

“The people count on us. When there is violence, they immediately ask where is the Church? Where are the leaders? They depend on us, on our support, on our help, on our prayer, and on everything we can do for peace in this country.” 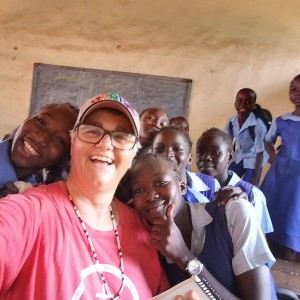 Sister Beta Almendra (in the middle).

Aged 52, Beta Almendra is originally from Portugal and this is her second missionary experience in Africa, having served for six years in Kenya. She arrived in Wau in early 2021, when the coronavirus pandemic was in full force. She says there is a huge expectation regarding the Pope’s visit, compounded by all Pope Francis has already done to bring peace and an end to violence and war in this country.

“Many of the people of South Sudan have never known anything else. There are generations that were born into war. And the last war was terrible, so much was destroyed. Schools, infrastructure, hospitals, churches, lives, many women and children, and there was also an attempt to eliminate people with a certain education, people who could become future leaders”.

In April 2019 Pope Francis stunned the world when he bent down to kiss the feet of President Salva Kiir and his designated Vice-presidents Riek Machar e Rebecca Nyandeng, who were taking part in a spiritual retreat in the Vatican. The gesture is still remembered in South Sudan today. Peace, however, remains fragile. “Just a few days ago”, says the missionary, “we had a period of high tension, and war almost started again. One of our church leaders went to the president and vice-president and asked them. ‘Don’t you remember what the Pope did to you? You said publicly that it had changed your lives, that there would be no more war in South Sudan’. It was that memory, that gesture, that led these leaders to reach a new deal, to dialogue once more, to take one more step towards lasting peace”. 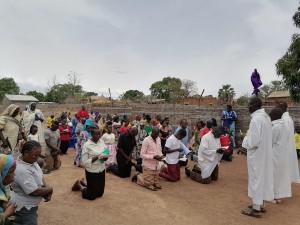 The Pope’s visit in July comes at a very important time for the country, with elections scheduled for December. At the moment, however, all attention is focused on the Holy Father and making sure the trip runs smoothly. In order to see the Pope, Sister Beta will have to get to Juba, an “expensive, and dangerous” trip, but one which she will “gladly undertake”.

“My expectation for this trip is that people will understand that peace is possible, that peace is something good, that it is the only way to develop this country, for schools and hospitals to keep functioning, for the South Sudanese people to grow as teachers, doctors, pilots, engineers, and that they might be able to care for their own country, in peace”.

“We are counting on you”

The Pope’s visit is also bound to highlight the difficulties of the local church, the basic needs of the population, and the urgent aid required by many sectors of society. “The Church in South Sudan is very dependent on external help. Speaking of the diocese of Wau, everything needs to be built:seminaries, diocesan houses, convents, schools, hospitals. It’s a question of investing in structures that existed but were destroyed. We really do depend completely on the outside.”For this mission, as with all the other needs of the Diocese of Wau, the Portuguese nun says she counts on the help of ACN and its benefactors. “We are counting on you!”

Aid to the Church in Need has been supporting South Sudan since 2015, funding the construction or reconstruction of churches and pastoral centres, the formation of seminarians and living expenses for priests and religious.For example, currently ACN is helping to build a priests’ residence in the cathedral’s parish of Wau.