Devastated Kyiv seminary plans to reopen – thanks to ACN

A seminary damaged and ransacked by Russian troops – who stole a chalice given by Pope St John Paul II – plans to re-open its doors this September with help from ACN.

Aid to the Church in Need (ACN) has announced that it will help rebuild Sacred Heart Seminary in Vorzel, 20 miles (30 Km) east of Kyiv, which was looted by Russian troops after sustaining damage from two mortar bombardments.

Seminary rector Father Ruslan Mykhalkiv told ACN that the buildings were left in a terrible state.

He said: “They took everything they could – kitchen utensils, washing machines, computers and air conditioners.

“The seminarians’ rooms were ransacked and they took liturgical items, including a chalice donated by Saint John Paul II when he visited Ukraine in 2001.”

ACN has promised to cover the costs of replacing the furniture and equipment that was stolen in addition to rebuilding. 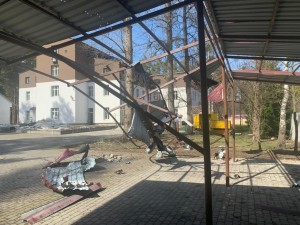 Ukraine, April 2022
Seminary of the Sacred Heart of Jesus in Vorzel damaged and assaulted during the war.

The Latin-Rite seminary was home to 25 young men training for the priesthood, but they were forced to abandon the site on 25th February, after Russian Federation fighters seized Kyiv International Airport and proceeded to enter Vorzel.

They had already occupied neighbouring Bucha, where soldiers reportedly killed hundreds of civilians.

Students and seminary staff fled with five children from the nearby orphanage and the two Sisters caring for them.

Father Mykhalkiv was able to return last month after Russian forces were driven out from the area around Ukraine’s capital.

He said: “We will be very grateful to ACN, if our seminarians manage to return in September.”

Magda Kaczmarek, ACN head of Ukraine projects, stressed that helping the Church to recover would be part of the charity’s ongoing work in the country.

She said: “Since the war started, we have been giving our full support to the local Church of both rites, Latin and Greek Catholic.

“First with emergency support in the war zones, and for refugees in the west of the country…

“Furthermore, in a second phase, we have been helping the parishes and monasteries in Ukraine that opened their doors to refugees, giving them material and spiritual support.

“In a third phase, and within our possibilities, we want to help repair the damage.”

Since the invasion of Ukraine, ACN has provided essential help to enable the Church to minister to those affected by the war.

This includes aid announced last week providing food and shelter for more than 200 displaced women and children being cared for by Ivano-Frankivsk Archdiocese, western Ukraine.