PAKISTAN – All Christian TV networks closed down for lack of permits

11 Christian television channels in Pakistan broadcasting in Urdu were ordered to stop transmitting, leaving the country’s 2.8 million Christians with no public media presence for the first time in nearly two decades. The Pakistani Media Regulatory Authority said they were illegal” and did not have a permit to broadcast. It instructed the Regional Directors General to stop the illegal transmission of TV channels in their respective regions immediately. 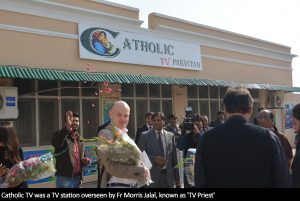 “It’s true that we didn’t have permission for the radio,” Alessandro Monteduro, president of the Italian branch of Aid to the Church in Need which has been supporting a specific project on Catholic TV, the television network of the Archdiocese of Lahore. However, he said the network had been following the proper legal procedures, but that the procedures had been changed and that they were unaware of the changes.

In Monteduro’s opinion, the absence of the permit was used as an excuse to prevent the Christian message from being heard in Pakistani society.  He was sceptical about the possibility of re-opening the network, saying that “without a collective indignation I don’t think we will be given the possibility of reopening.”
He hoped it might be possible for the network to start again from zero, with the proper legal permits.

Father Morris Jalal, who founded the now-illegal Catholic TV, condemned the ban and urged the national community to speak out against what he referred to as a “sweeping attack on religious freedom”.

“As citizens, Christians have the right to practice their religion, but if they block you, it means not all citizens are equal,” he said . “We must protest this decision, and we hope the West does it as well.”

Father Mushtaq Anjum also claimed the closure which made “the proclamation of the good news illegal,” was a “discriminatory law that affects non-Muslims”.

However, Fr Robert McCulloch, an Australian priest and member of the Missionary Society of St. Columban who has lived in Pakistan for 34 years, urged caution, saying “it’s important not to overreact” to the situation.

Although he said the closing of the networks was regrettable, Fr. McCulloch noted that “these are not big TV channels … they’re small diocesan networks or even parish networks that are being set up, maybe in a particular locality…. they’re not national.”

He thinks that the decision was not taken out of direct malice toward Christians. The Pakistani government may be cracking down more on telecommunications organizations without proper permits because of intensifying conflict with India over the disputed territory of Kashmir. Most pro-Christian channels in Pakistan are based abroad because PEMRA does not release licenses for religious broadcasting and only allows the airing of Christian messages for Christmas and Easter.

Given the situation, Fr Robert McCulloch noted that “things are rather tense there at the present time.” As Lahore is within 100 miles of Kashmir, “anything concerning telecommunications, anything like that is being heavily monitored.”

Fr McCulloch emphasized that although Christians in Pakistan certainly faced “intense discrimination,” which at times includes violence, the situation is “not one of persecution.”
“Our hospitals are open, we’ve got a major seminary in Karachi for the last four years where there are 84 seminarians” he said.

Pakistan could not be compared to other that in other countries, such as North Korea, China, Saudia Arabia, Iran, or Afghanistan. “People have got to be careful in terms of what words they use in describing the situation there. Discrimination certainly, but persecution not.”