LEBANON: “What is happening is a crime against humanity”

The Lebanese people are struggling to meet the basic needs of life. No gas, no electricity, no bread, no medicine, no security, no jobs, no future—and worst of all, people are fighting each other over a gallon of gas and loved ones are dying because of  a lack of medicine. Aid to the Church in Need (ACN) spoke with two Lebanese Christians about the situation:

“These are the worst days of our lives, filled with humiliation and suffering,” Morcos, a 60-year-old Maronite, told ACN. He is obliged to live away from his wife and two children since they need to work in Beirut; he lives with his 95-year-old mother and his sick brother in their hometown. One of his sons supports him financially, while a second son can barely meet his own needs.

“This family basically has no steady income and depends on support from the community and organizations that give them aid every now and then. “I am grateful that Jesus sent us such kind people to give us a stream of hope in this terrible situation but, unfortunately, their support is not enough for my family to survive,” said Morcos.

“My mother is old and she needs all kinds of daily medications. My brother is diabetic and has vision problems. They both need special care, and I am no longer able to provide such care.

“My daily task has become going to every pharmacy in Beirut to get medicine for their chronic diseases, but sometimes I come back home in despair with no medicine because I could not find it, or because I could not afford its new price. My mother and brother spend days and sometimes a month without taking their medicine. Some drug stores give me the generic version, an unfamiliar brand from an unknown source, sometimes past the expiration date. But it would be better than not taking medicine at all and it is usually cheaper.

“I know that the cause of Lebanon’s ongoing crisis is political and most Lebanese people do realize this.  Our government and politicians aren’t even aware of our tragedy since they live in their own luxurious world. The prices of everyday goods have increased by an average of 600 percent.

“I was a chef for more than 30 years and everything was fine until the hospitality sector in Lebanon started drowning due to the unstable conditions. Then I worked as a taxi driver, but I also lost my job because of the economic crisis and due to lack of gas. So I am unemployed, just waiting for the help of charities.

“There are many NGOs in Lebanon that distribute food packages containing oil, canned food, beans, etc., to people in need. Churches and some organizations offer daily hot meals for thousands of people. Many NGOs provide medicines and vitamins. These contributions are keeping the Lebanese people from starving. The main support for many families are the Lebanese emigrants who wire money to their relatives every month. Millions of “fresh dollars” get wired every month from Lebanese abroad. But we haven’t any such relatives.

“My heart bleeds when I see my family suffer and I can’t change this harsh reality, I wish I could find any work opportunity outside this hell, so we can leave this unlivable country for any other one and get back our dignity.

“If it weren’t for God we wouldn’t be here right now. Thank God our faith has only grown stronger. Our faith is what has been keeping us standing tall and alive until now. We have no one to run to except God during this crisis, in these hard times and even before, because He is the one who gave us life and He is the one who can take it away.” 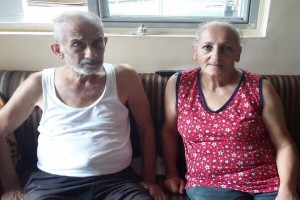 Ferial and her husband

Ferial, 63, is a mother of four; her husband lost his job after he had cardiac problems. She works as a cleaning lady in a school for 30,000 Lebanese Lira a day, which was equivalent to $20 a few months ago. Today, after the depreciation of the Lebanese Lira which jumped from 1,500 LL to 20,000 LL to the dollar, her salary is the equivalent of $1.50 per day. She told ACN her story:

“My only son works as a delivery man, and of course, what he earns is not enough to buy the most basic necessities. One of my daughters has to pay back a loan to the bank. Before this crisis, the situation was better, but today, she is struggling to secure the monthly installment. My heart burns for my children and for my sick husband. Last week, my husband asked me for a peach. I went to the store and bought him only two pieces, because I couldn’t afford more than two. His doctor said that he has to eat healthy food, and looking at his skinny and weak body, you can see what kind of food he eats.

“We are really in hell; bakeries warn they might have to close due to fuel shortages. We need to wait in line to get bread and it has become difficult for us to buy bread because of its high price.

It is summer and there is a heat wave and there is no electricity to run the air conditioning or even fans. My husband suffers from it all because of his illness.

“What is happening is a crime against humanity and this situation cannot be tolerated. I am a woman in my sixties, but it seems that I am eighty because of worries and oppression. I’m a mother, my mission in life is to be a good mother, and even if I sacrifice myself, that’s what I learned from Jesus. But I am sorry for my country, myself and the Lebanese people.”

In 2020, ACN funded projects in Lebanon which included food packages for Christians hard-hit by the August 2020 explosion in Beirut harbor, and the repair and reconstruction of churches. This year, ACN has continued to support numerous projects in the country.