LEBANON: Not giving up hope

The economic situation in Lebanon, which has further worsened after the COVID-19  outbreak and the 2020 blast in the Port of Beirut, has plunged the Lebanese people into unprecedented poverty levels. More than three  families out of four face food insecurity in the country. The Lebanese Lira has lost over 90 percent of its value and inflation is approaching triple-digit rates. In this context, families have to choose between eating, healthcare, keeping warm, or sending their children to school. 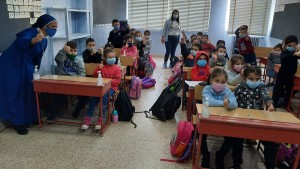 The vast majority of Catholic schools across the country have prioritized education no matter the price. In Beit Hebbak, a Maronite village in the central district of Byblos,  nuns from the Congregation of the Missionaries of the Most Blessed Sacrament run a school which accommodates 1,500 students from around thirty surrounding villages. The majority are Christians, but Muslims are also enrolled in this school. They are aged between 4 and 18, and 80 orphan girls are boarded and lodged.

The institute is a direct-grant school. State had pledged $ 40 per year for each of the 700 children in primary school, but the school has not received public funds since 2019. Families who could afford it were expected to contribute up to $ 55 a year for school fees but, again, their financial situation made it difficult for most parents to pay.

Sr. Maguy Adabashy, the school’s principal, has refused to send children back to their families and she struggles every day to find funding. Each month, the school must pay the salaries of 80 professors and 15 administrative employees. Teachers have also asked for a rise in pay, as they too have to face financial difficulties. They often have to travel many kilometers to get to school and petrol is overpriced. To reduce expenses they carpool together or take the school bus, otherwise many students wouldn’t be able to attend the classes. 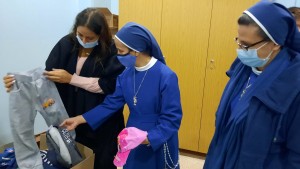 To further reduce the financial burden on families, Sr Maguy has allowed students to abandon the school uniform which was compulsory until last year.

Paradoxically, “the devaluation of the currency has helped us, because the small donations made in US Dollars represent a sum which has enabled us to take several initiatives”, explains Sr. Charlotte, one of the principal’s assistants. Indeed, thanks to small donations in Euros or US Dollars, the nuns have managed to equip several families with Internet connections and also provide some fifty touch pads allowing students to follow the classes remotely. The school is presently open only twice a-week, on Tuesdays and Wednesdays, because of the COVID-19 pandemic. On the other days students follow the classes online.

However, all this is not enough. Sr Maguy submits her yearly projects to obtain financial support from international organizations linked to the Church, such as Aid to the Church in Need, SOS Chrétiens d’Orient and various national Caritas organizations. So far many have responded to her plea for funds. The ongoing crisis demands that the school’s needs are planned  carefully in the long term so that funding is assured every year. In fact, like so many other schools in Lebanon, the Beit Hebbak Catholic school  is totally dependent on external aid without which it would not survive and would be forced to close.

All these endeavours are supported by hope. Difficulties have not discouraged the nuns who have kept their smile. At the boarding school, 80 young girls, who need to be lodged  and fed, are helped by volunteers, including Marine, a French  pensioner who comes here two or three times a year to devote a month and a half of her time to work for the school. Teachers, nuns, administrative staff, and volunteers are all together to  ensure the education of the new generations continues during the crisis. They all feel tired, at times even exhausted, but they don’t show it and are totally devoted to this cause.