LEBANON: “I became a refugee, just like the Child Jesus”

“My name is Majid. I now live with my family in Lebanon, but my father tells me that we are originally from Syria and that our real home is there.” This 12-year-old boy is one of the thousands of refugees who were forced to leave their country and seek refuge in the town of Zahle, in the Bekaa Valley of Lebanon.
Majed was just three years old at the time and has no memory of the horrors of the war in Syria, which his father describes to Aid to the Church in Need (ACN):

“At least 50 people in our own locality died in six months, while others were abducted. Many others had their possessions and their means of survival destroyed and burned. We endured it for a year, living in hell—with no work, no electricity, no schools, no food. We daily ran the risk of being shot by snipers. The closure of the schools left an entire generation without education.”

Ever since the war began, the Christians were aware that the only thing the terrorists wanted was for them to go away. Many Christians in Syria report how the terrorist groups would repeat a simple formula—the ‘the Alawites to the grave, the Christians to Beirut’ (the Alawi, or Alawites, are a Shiite religious group to which President Assad also belongs. Beirut is the capital of Lebanon). “It was a war, with everything that that implies. Even before the situation had deteriorated, we and our Christian neighbors knew that our houses and streets had already been doled out, some of the neighbors were even guessing who was going to get one house and who another,” Basman Abboud explains, with immense sadness. 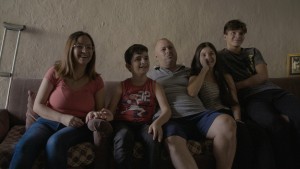 Majid doesn’t even recall how they fled from their country, but his father Basman Abboud will never ever be able to forget it. “They attacked us with guns, although we were completely defenseless. They killed 15 young people and burned down five houses. Everybody fled. We ran, along with everybody else, not taking anything with us except the clothes on our backs. We ran out of our homes and fled.”

They arrived in Zahle on March 20, 2012, a date the family will never ever forget, since it remains a tragic event in their history. Initially they lodged with a relative who had sought refuge in Zahle a few months earlier; 15 people in the same house, sleeping in turns, because there were not enough places for them all to sleep. It was winter and they didn’t even have coats. It was in the midst of this situation, Majid’s father explains, “that we heard that the Catholic archbishop was providing aid for the refugees. What would have happened to us without this help from the diocese? We’ve had to cope with so many different problems since we arrived here.”

Although after a few months he found work and was able to move the family into a two-roomed house, 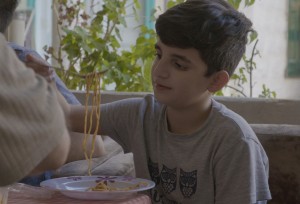 the money he earned was barely enough to pay the rent and electricity and other essential household expenses. And so Basman and Majid and their family were grateful to be able to take advantage of the food aid program known as the “St. John the Merciful Table,” an emergency meals program for Syrian refugee families and the Lebanese families thrown into poverty by the country’s economic terrible crisis.

“Thanks be to God, without this aid we would not have known what to do, since on top of everything else, owing to the COVID-19 crisis, we had no work for a whole year. If the Lebanese themselves don’t have any work and face a very difficult situation, then what can be said about us? We are refugees in Lebanon. Without the help of the diocese, including the medical care, since the Tel-chiha hospital, which is run by the diocese as well, also helped us with surgery for my wife,” Basman explains.

Prayer has always been the great support and strength of this family during these years of such great privation and suffering. “The Lord is present, and we trust in his presence. We are still all alive, and we are grateful to all those who have been so good to us and we pray that God may reward them, because we can never repay them for what they are doing for us. But God sees and knows everything they are doing for us,” he said.

Majid is happy at the thought that Christmas is coming soon, but things are still difficult at times. “I have become a refugee, just like the Child Jesus, who also had to flee together with his parents. Sometimes my family gets sad and feels nostalgic. And there are also tears when daddy tells us that we once had a beautiful house, light and spacious. The Church used to be decorated and welcoming for everyone at Christmas time, but now everything has disappeared. My desire for Christmas is that people may think of families like mine and help refugees to have hope in a better future. Happy Christmas everyone!”