Launch of Religious Freedom in the World report 2016 in Malta

Religious Freedom in the World report 2016 launched in Malta

The 13th edition of the Religious Freedom in the World report, produced by Catholic charity Aid to the Church in Need (ACN) was launched in Malta on 25 November 2106. To mark the occasion, Portes des Bombes was lit up in red on Friday evening in memory of all those who were killed for their religious beliefs.

The Keynote Speaker, Syrian priest Fr Ziad Hilal SJ, came to Malta to speak at the launch. Fr Hilal was a former Project director in Homs from 2012 – 2015 of Jesuit Refugee Services. He is the current coordinator of Aid to the Church in Need’s humanitarian projects in Syria and Lebanon.

Stephen Axisa, Director of ACN Malta, delivered the opening address and introduced the speakers. In her speech the President emphasised the importance of tolerance and said that people of different faiths should learn to co-exist in harmony within their community and respect each other.

Fr Hilal gave a moving account of the suffering the people of Syria have endured during over 5 years of conflict and spoke about ACN’s aid projects for victims of war and displaced families. These include community kitchens offering 10000 free meals a day, help with education and housing and St Anthony clinic which provides medical aid for Iraqi and Syrian refugees.

Mgr Charles Cordina, Episcopal Vicar for Diaconia who attended on behalf of the Archbishop, spoke about current threats to religious freedom in Europe. 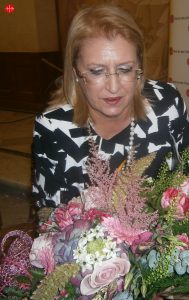 At the end of the launch event, copies of the Executive Summary of the Report were handed out to the speakers and everyone who attended.

ACN’s latest Religious Freedom report highlights the growing menace of Islamic hyper-extremism which is causing instability in many regions and threatens world peace. According to the United Nations, refugee numbers are at a new high of 65 million.  The Report says that Islamic extremism is a key factor in the massive displacement of people fleeing violence in countries such as Afghanistan, Iraq, Syria and Somalia.

Of course not all problems regarding religious freedom are to do with militant Islam. The Report describes a “renewed crackdown” on religious groups in China and Turkmenistan and an ongoing denial of human rights for people of faith in worst-offending countries North Korea and Eritrea.

Nor is the outlook universally bleak – looking at Bhutan, Egypt and Qatar, countries notorious for religious freedom violations, the report found that the situation had improved for faith minorities during the last two years.

Full details of the findings of the Report can be accessed online  www.religious-freedom-report.org