The mission parish of St. Charles Lwanga lies within the apostolic vicariate of Isiolo, in north-east Kenya, in a majority Muslim area where Catholics make up a minority of only 5% or so. The parish was established here in 2005 – the same year that the then apostolic vicar, Bishop Luigi Locati was murdered during a time of local inter-tribal unrest. There are constant tensions in the region between farmers and herders and  at the same time, there is a degree of hostility and rejection among the Muslim population towards the Christians. 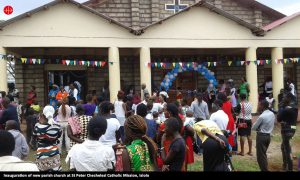 Despite this, the parish of St. Charles Lwanga is a very lively one. Every Sunday there are over 700 Catholic faithful attending Holy Mass, and most of them are children or young people. The number of people seeking baptism is growing year on year. The priests of the parish have come up with a number of creative ways of conveying the faith and rooting it in the hearts of the people. For example, every Sunday there is a competition for the best retelling of Bible stories. Every day, from Friday to Sunday, there are catechetical sessions and also workshops which are organised in order to address some of the cultural customs, traditions and preconceptions that are harmful to the people‘s development and contrary to the Gospel message of Jesus Christ.

During the week, the priests also make visits to the families wherever they happen to be, along with their herds of livestock. It is important for these Catholics to know their faith well and be strong in it, since as a religious ourhealthissues.com/product-category/gastrointestinal/ minority they face considerable resistance and hostility. On top of this, some of the Muslims have even tried to draw Christians away from their faith by offering various kinds of material incentives. For example, they promise to give a camel to anyone who will renounce the Christian faith.

The parish has four outstations, and one of them, that of St Peter in Chechelesi, is developing so dynamically that it has been decided to establish it as an independent parish. It is a township in which many former nomadic peoples have now settled, since there is a well here. For some time now it has been a great dream of the local people to be able to build their own church here. They have organised Harambees – big fundraising gatherings  – but not managed to raise a great deal. Given that 90% of the people in this drought affected region are extremely poor and live on less than a dollar a day, this is hardly surprising.

Now, thanks to the generosity of ACN‘s benefactors, it has been possible to make their dream a reality. The new church has been consecrated by the bishop and the event was marked with great joy and with a great celebration. You helped initially with a donation of 30,000 Euros, and followed this up with a further 20,000 Euros for the final completion work. Needless to say, the people of the new parish of St Peter in Chechelesi are overjoyed to have a church where they can now fittingly worship God.