The city of Jos, in Northern Nigeria, has suffered long years of violent inter-religious crises in the past and just when it seems to be rising up like the phoenix from the ashes, the incessant Fulani herdsmen attacks which have torched many other states in the Country, makes this impossible. Last month, another fresh cycle of violence was triggered by a night attack on innocent citizens by the herdsmen, rendering so many people orphans, widows and helpless. 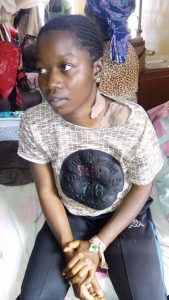 One of such persons is Blessing Kogi, a 23-year-old University student who lives in Jos with her family.

In an interview with ACN, she explained how she lost her mother, three siblings and six other family members to a tragic attack by the Fulani men in one night! “In the evening around 7:00 pm, we were all in the house having dinner, my grandmother, my mother, three of my siblings, my sister-in-law, nephew and three of my cousins. We were eating when they suddenly came in and opened fire.”

“So, I fell on the floor and played dead, but one of them still came to where I was lying down and shot me twice – on my neck and shoulder.”

“The men who were speaking Hausa and Fulani language to each other continued their killing spree in my neighbourhood. In total, 15 people were killed in my area: 10 in my house, three in another and two elsewhere. They also injured five people, including three children, in another house, and the two of us.”

Only Blessing and one of her cousins survived the attack, but they too sustained injuries.

Her father was still at work when the unfortunate incidence took place.

Just like many other victims, Blessing is broken and traumatised. She says, “I feel I don’t have anything left for my life again. My father has not been eating. He cannot even talk. We don’t know what to do and how to start either”

“This situation has really affected my faith as a Christian when all this happened, I said many things without even knowing, I thought there was no Christ again, but I later realized that God is alive and He knows everything and so I leave everything in His hands. Now, I find strength in praying and singing praises to God”, she said.

Blessing hopes to finish school so that she can change her country and community and take care of her father.

Commenting on the Fulani herdsmen attacks in many parts of the Country especially in his Archdiocese, Catholic Archbishop of Jos, Most. Rev Ignatius Kaigama said, “once again, in Jos, innocent lives have been lost, properties destroyed, healing wounds reinfected, psychological trauma caused, inter-ethnic and religious suspicion rekindled”.

“The people have been unable to do their normal farming activities this year because of the fear of constant attacks. They certainly need help with feeding, medication, clothing and more so, to be able to return to their homes to start rebuilding without any further molestation by the merchants of evil.”, he said.

The Archbishop who has become the face of inter-religious dialogue in Nigeria said, “we shall not give up in our struggle for peaceful coexistence and civilized conduct. Everyone must do his/her part: Religious leaders must sincerely preach peace. Politicians – avoid operating negatively behind the scenes! Security agents – be fair, unbiased and neutral in your operations! Government leaders- care for citizens facing hostile attacks by terrorists/criminals. Youths – avoid irrationality and stop being used! Terrorists/criminals- stop injuring humanity! Life is sacred. Respect it!”

H.E Mgr Ignatius Kaigama, Catholic Archbishop of Jos is being invited by Aid to the Church in Need (Malta) as the Keynote Speaker for the  Religious freedom report Launch to be held on 24th November 2018 at the President’s Palace in Attard, Malta by the courtesy and under the distinguised patronage of Marie Louise Coleiro Preca, the President of Malta.