IRAQ – Displaced Christians rejoice as Qaraqosh is liberated after 2 years

“We are so happy, and we are praying to be able to return to our homes one day”.

On 6 August 2014 the plain of Niniveh was overrun by the forces of IS. It was the beginning of a time of exile for the more than 100,000 Christians living there. One week later, for the first time since then, representatives of the international Catholic charity and pontifical foundation Aid to the Church in Need (ACN) visited the Kurdish capital Erbil, where many of these Christians had sought refuge. They found many people there from the town of Qaraqosh. This was in fact the most populous town in the plain of Niniveh and practically totally Christian, with some 50,000 inhabitants and 10 Christian churches. The people had to abandon everything and flee for their lives. 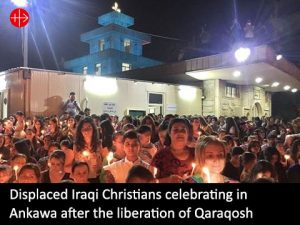 Two years, 207 days, 19 hours, 48 minutes and 13 seconds later, news reached us of the liberation of Qaraqosh, filling us with great joy. Johannes Heereman, the president of ACN read out the news with great emotion: “Qaraqosh is free! – and it appears that parts of the neighbouring communities of Bartella and Karamlesh have also been liberated. All these are names of places that have been so much in our prayers over the past two years”, he added. According to a report by Emanuel Youkhana of the organisation CAPNI, the IS fighters did not put up any real resistance, but retreated, leaving behind just a few snipers.

The people of Qaraqosh, which is also known as Baghdida, are overjoyed at the news, and social networks are rapidly filling with videos and photos of people celebrating, singing and praying. But the past two years and 207 days have changed the lives of its inhabitants. Thanks to the new social media, such as Facebook and Whatsapp, it is not difficult to make contact with some of the individuals with whom we share those earlier days of anguish and fear. Aded, who lost a son and a nephew that day – both killed by a grenade that fell in the garden of their home – fled to France with his wife and his daughter, who is undergoing medical treatment. As a result he had to wait for two years, while the rest of his family and his parents remained in Erbil. “Today all the Christians who used to live in this area are very happy, yet we are worried about the future. People are afraid to return to their homes, and as long as there are no international forces to protect them, they will not return”, he says.

Martin was a seminarian when he was forced to flee from Qaraqosh. A few weeks ago he was ordained to the priesthood, and the news reached him during a visit to Baghdad. “The first thing I want to do is to give thanks to God. I am so happy. I always believed it would happen one day, but I almost cannot wait to see the town. When I heard the news, I thought: good has triumphed over evil. God does not want to see his people still more unhappy; he wants us to be happy. We are very happy, and we are praying to be able to return to our homes one day. Now the eyes of the whole world are on Mosul”, he told us.

Chaldean Catholic Patriarch Rafael Louis Sako shared his reactions with us from Berlin, where he is taking part in a working party to discuss the future of Iraq, and in particular that of its minorities. “I hope that the liberation of Mosul and the plain of Niniveh, which is underway, will succeed fully. This is a sign of hope for all of us,” he told ACN. A moment of great joy and hope, but at the same time one of uncertainty, since it is not difficult to see the great challenge that is presented by the liberation of the Christian towns and villages of the plain of Niniveh. Some of the key requirements for a successful return of the Christians to their ancestral homes were outlined by Sako in the vision he presented in Berlin to the former US ambassador to Iraq, Mr Ryan Crocker: “I hope the liberation of Mosul and the Nineveh plain that has started can be successful. This is a sign of hope for all of us. After the liberation and the end of these conflicts, the Western governments involved should assist the refugees in returning to their homes; securing areas of conflict; providing full protection for them; restoring their rights and properties; contributing to the reconstruction of towns and cities; compensating the resulted damages and helping the restoration of the cultural and religious heritage of all its components.”

Johannes Heeremann, executive president of ACN, shares the concerns of the Chaldean patriarch. “The liberation of such a significant city as Qaraqosh fills us with great joy and hope; however it is merely the first step. It is going to be a long and difficult journey, since security must be guaranteed and peace must be consolidated. For our part ACN will continue to work and help the Iraqi Christians as it has done throughout the past stages of the crisis.”

Since 2014 ACN has provided over €20 million in aid for the Christians of Iraq, supplying emergency aid and funding projects for education, food and accommodation for the refugees.