In spite of everything, “Living in the Holy Land is a vocation and a privilege”

The Christians of the Holy Land are preparing to celebrate Christmas, more than 2000 years after the birth of Christ. What is their situation today? The pontifical foundation Aid to the Church in Need interviewed Mgr William Shomali, Vicar General of the Latin Patriarchate of Jerusalem.

How are the Christians of the Holy Land today?

The Christians of the Holy Land continue to live the same situation they have done for the past 75 years, with the highs and lows of local and international politics. On the one hand, they feel optimism with the return of pilgrims, who have been prevented from coming here for three years because of the pandemic. On the other hand, they are worried about the return to power of Netanyahu, and especially about his coalition with far-right parties. There is international concern that the Religious Zionist Party, with its two protagonists Bezalel Smotrich and Itamar Ben Gvir, is far-right and wants to increase the settlements in the West Bank and share the Temple Mount – which the Muslims call Al Aqsa. This could cause an outbreak of violence. The two-state solution is now near death, and risks being buried. 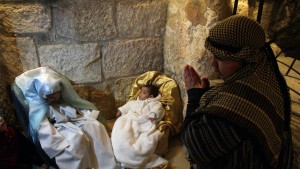 Handicapped children staging the birth of Jesus. The children live in a house in Bethlehem run by sisters of the Institute of the incarnate word.

Does the approach of Christmas create a particular atmosphere?

People are really looking forward to the Christmas period, of course, especially the population of Bethlehem. The town and its inhabitants then become – though only for a few days – the object of local and international attention. In Jerusalem we light up a fir tree in the New Gate (we did it before in the Jaffa Gate for a few years, but it was attacked). The Christians of Gaza have to obtain a permit to visit the holy places, including Bethlehem. They are very happy when they are able to go but, alas, they are not always given permits.

On 8 June, after 20 years of legal battles, Jewish settlers acquired two hotels situated in the Christian quarter of Jerusalem. Do you see that as a threat to Christians?

The dispute about the two hotels has a political dimension, because it corresponds to an Israeli vision of strengthening the Jewish presence in the Old City. It also has a religious aspect. Most of the religious processions to the Holy Sepulchre and almost all the pilgrims pass in front of the two hotels. Having these places controlled by settlers could have an impact on the processions and the free passage of pilgrims, given that in the past the Haredim, or Ultra-Orthodox Jews, have sometimes spat on people wearing a cross. The fear does not relate to Jews as such but to the Ultra-Orthodox or the settlers.

Is this movement to strengthen the Jewish presence in the Old City recent?

No, this vision has existed since the SixDay War (5 to 10 June 1967). But the process of judaisation is gradual and is continuing.

Do you have the sense that the exodus of Christians from the Holy Land is accelerating? 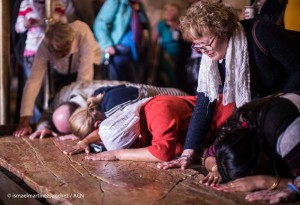 Pilgrims kiss and lay their hands on the Stone of Anointing in the Church of the Holy Sepulchre (Jerusalem). According to tradition it is considered the place where the body of Jesus was anointed after being taken down from the cross.

The exodus of Christians has been going on for more than a century, for the same political, economic and social reasons. But in spite of that we are not falling into pessimism. Although the percentage of Christians is falling, the overall number is increasing. In Israel and Palestine, there were only about 21,500 Christians in 1848, which represented 10% of the population of the whole of historic Palestine. Now we are less than 2%, but the number of Christians is more than 230,000, not counting foreign workers. But it’s true, the political and economic situation has an impact on the departure of Christians, especially those of Palestine.

What does the Church suggest to encourage young people to stay?

We try to say to the young people that being born in the Holy Land, and living here, is a vocation and a privilege. We have built homes for young couples, distributed humanitarian aid…We manage lots of excellent Catholic schools to educate both Christians and non-Christians. All these initiatives could dissuade certain people from leaving but it is not enough. Finding good work and living in peace are two priority elements. They don’t depend on the Church.

As in most Middle Eastern countries, ACN prioritises pastoral outreach above all else. Furthermore, the foundationsupports two interfaith dialogue initiatives: one is run by the Jewish organisation JCJCR, the other – Al Liqa – by Arab Christians. ACN funded a total of 14 projects in the Holy Land in 2021.