The fighting in Aleppo over the last few days has been particularly fierce. In both East and West, quarter by quarter, street by street intense bombing coupled with small arms fire has marked the ebb and flow of war between rebel and government forces. More than 70% of the former rebel areas is now in the hands of the government. The control of Aleppo, Syria’s second largest city, is decisive to the outcome of a conflict that has cost over 400,000 lives and consumed the country for over six years. 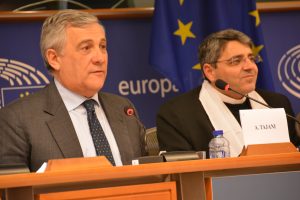 Those who could leave have: in recent months alone over 50,000 people have fled. Of the 120,000 Christians in Aleppo before the war today best estimates suggest only 30,000 remain. Among these, in a small room at the back of the church of Our Lady, was a small group of children and a priest gathered for a long-awaited one hour Skype conference with EU politicians at the European Parliament. In the end, the Skype conference almost didn’t happen.

The weeks leading up to the December 6 event, the feast of St Nicholas, were full of hope. In West Aleppo a group of 25 Christian and Muslim children under the guidance of the Franciscan friar Fr. Ibrahim prepared songs, drawings and special messages of peace. In Brussels, equally, the offices of European Parliament Vice-President Antonio Tajani working together with Aid to the Church in Need (ACN) coordinated a special exhibition of the Syrian children’s drawings, arranged a song of peace from a Catholic Chaldean choir in Brussels, tested the Skype capabilities between Aleppo and Brussels and sent invitations and reminders to EP members. And then the bombs came.

At 12:00 noon, six hours before the Skype link, Fr. Ibrahim wrote that the conference would not go ahead: bombing was so severe that schools were closed, roads were empty and mothers were unsure whether to allow the children to come. At the Parliament, back up measures were considered. A broadcast of pre-recorded messages, a Whatsapp dialogue with Fr. Ibrahim alone, a focus on the exhibition of children’s drawings? 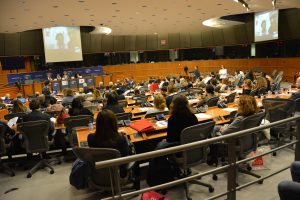 In the end, of the 25 anticipated, the faces of six children flickered onscreen. With shy waves, voices sometimes garbled by a limited connection, speaking a mix of Arabic, French and English, the children came to look into the eyes of those who had promised not to forget them.

They were not disappointed. The hall, headed by 15 high ranking MEP’s from across the political spectrum, international media and the Chaldean children’s choir, was full. The panel was chaired by Antonio Tajani and co-chaired by Anna Maria Corazzo Bildt along with ACN’s representative from Aleppo Fr. Ziad Hilal.

Antonio Tajani welcomed the children and decried the war, the bombing and the suffering of the children calling on the international partners to renew dialogue to end the conflict. “Thank you very much for your work. The European Parliament wants to strengthen your engagement in favour in peace. We are close to the people of Aleppo. Stop the bombing. Christian and Muslims can live together – it is possible to live in peace. We want to live together in peace”.

MEP Corazzo Bildt confirmed this message stating: “You are not forgotten, you are not alone. It is not the fault of children that there is war. Stop the bombing, conflicts don’t end with violence, only through dialogue. Europe has to do more to protect the rights of children. Thank you to the Catholic Church, the priests and the Chaldean Church.

Fr. Ibrahim in Aleppo answered. “Peace is possible together. I speak in the name of the people after six years war of an absurd war. Those who suffer most are the most weak – in this case the children. We have seen the lack of water, a lack of electricity, we have seen physical illness caused by psychological illness as a consequence of the shock of the bombs. We have closed the schools because the situation is so bad. We cannot continue to live like this. We have a big hope that this intervention with the EU will change this situation in Aleppo – so that young people will continue to live in this country and stay. We as Church are trying to do our best and allow them to live a measure peace – at least for some moments. We need your help – we have hope in Europe so that we can have our dignity in our country. I thank you from all my heart for this meeting.”

Then, one after another, the faces of the children were projected high overhead on the three European Parliament screens.

“I don’t sleep at night because of the bombs” said 10 year old Jean Paul. “I have lost a lot of friends because of the war. We have lost our places to play – now we can only play at home because it is too dangerous.”

14 year old Salim said: “I live in West Aleppo. We have war and we cannot live a normal life. If we go somewhere we are not sure if we will come back alive. All of my friends have died or have travelled to other countries because they are afraid to die. And we are also afraid of the bombs dropping on us. We hope you can bring peace to us.”

“I have grown up during the war and it is not easy to live like this because when we go to school we are afraid of being bombed and not to return to our homes,” said 10 year old Syline. “The bombs are falling on our houses – we have no water, our parents cannot work and there is no work in Aleppo and difficulties to eat and our parents cannot buy chocolate or meat and clothes. We hope that you can help us bring peace to our country.”

Finally 10 year old Christine sat before the webcam. “Each day I leave my house and each day I am not sure if I can return. My friends leave the country and leave me alone. Many of our friends are dead.” Her testimony was interrupted by her tears. In the parliament, silence: many of the parliamentarians wept with her. 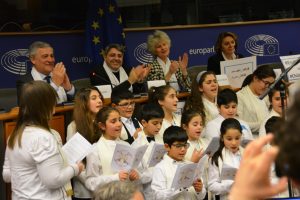 Following songs of peace exchanged between the six children in Aleppo and the Chaldean choir to which the parliamentarians clapped and sang, Fr. Ziad Hilal, having arrived the day before from Aleppo, stated: “I hope to have peace and reconciliation for our people in Syria. Without peace we will lose a people, a culture and a civilisation in Syria which will need many years to rebuild. As a priest we need peace to continue our mission in the Middle East as a bridge between East and West, Christians and Muslims, Eastern culture and Western culture. That is our vocation – and without this the Middle East will be emptied of its mediator of peace.”