Last week, as government forces stormed into eastern Aleppo 25,000 people had been forced from their homes, more than half of them children. Video footage showed the bodies of dead children being carried off the streets as what is left of the rebel enclave came under further intense bombing.

Stephen O’Brien, the UN’s humanitarian chief warned an emergency session of the UN security council that eastern Aleppo was being turned into “one giant graveyard” as the rebel-held area was being overrun by Syrian regime and Russian forces. 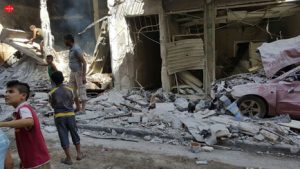 O’Brien highlighted the plight of civilians forced out of eastern Aleppo who who first had to cross frontlines and risked being caught in the crossfire. They faced danger not only from  rebel groups who tried to stop them leaving but also at government checkpoints where some were seized and “disappeared”.

“As we have seen before, across Syria and throughout the conflict, men, women and children, have been routinely arrested at government-controlled checkpoints, before being transferred to one of dozens of official or secret government-run detention facilities,” he said. “They are often held incommunicado and indefinitely, facing the risk of being subjected to torture and ill-treatment, extrajudicial killings or being disappeared.”

The Humanitarian Chief ended with a plea for help: “For the sake of humanity, we call on, we plead, with the parties, and those with influence, to do everything in their power to protect civilians and enable access to the besieged part of eastern Aleppo before it becomes one giant graveyard.”

The French envoy, François Delattre, said the crushing of eastern Aleppo was not just a humanitarian calamity but also a strategic mistake. “What is happening in Aleppo will only fuel chaos and terrorism. Not only is it not a way in our view to combat terrorism, but it is a mechanic way, automatic way, to fuel radicalisation and terrorism,” he stated.

Unicef’s regional director, Geert Cappelaere, said six million children in Syria were in need of humanitarian assistance, of which, two million were in hard-to-reach areas and 500,000 were living under siege, some for two years.

He vividly described what life was like for children in Aleppo: “I would like us all to pause for a moment and imagine life through the eyes of a child trapped in that tragic situation. As a boy or girl in Aleppo today, where do you find comfort and hope, amidst the bombs?” he asked the council. “Determined to learn, you attend school whenever your parents allow you to leave the house, but you do not know any more if you will ever come back. It is hard for you as a child to focus because it is cold and you don’t sleep well, haunted by nightmares and hunger.”

Matthew Rycroft, the UK ambassador to the UN, stated:

“Russia has vetoed time and again to prevent the security council from finding the unity necessary to end this war. And so I ask again Mr President, what will it take?”

However, the Russian ambassador to the UN, Vitaly Churkin, rejected calls for an end to the offensive and dismissed ‘pointless’ UN resolutions calling for an end to the bloodshed in the security council emergency session. Churkin said Russia shared concern for the fate of the civilian population but argued their plight would not be eased by ceasing “counter-terrorist operations” against “bandits” that the UK and France had “coddled and fuelled”.