In a predominantly Muslim country, extremists are using suicide bombers to cause carnage and instill fear within Christian groups and other minorities.

With your support the Church in Pakistan continues to grow – and we are working together with our partners in the country including Archbishop Joseph Coutts to provide Christian education and catechesis for children, emergency support for victims of persecution, training for seminarians and construction of churches.

Archbishop Joseph Coutts  of Karachi said: “We are not just grateful – more than that – we are joyful because your help enables us to survive and grow.” 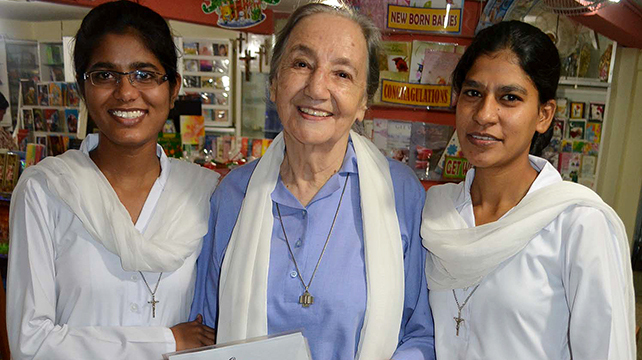 Witness to a beautiful faith

“Our people suffer. Life is not easy but it is beautiful because we are here to give witness to our faith.”

After 35 years in Pakistan, Sr Daniela knows only too well the problems Christians and other minorities face, how they are verbally abused at school, denied jobs, put under pressure to convert to Islam and sometimes forced from their homes.

The 83-year-old Daughter of St Paul had to climb through the back window of her shop in Karachi to escape extremists angry at the crosses, statues, devotional music and other items she sells.

“I have been threatened in our bookshop,” she said. “They came and stole our CDs, cassettes and other items. Fortunately our bishop intervened and we got our stuff back.”

“Because so many of our people are so poor, we sell some of our items, like the children’s colouring books, at just a few pence each which makes people very happy.”

ACN provides a vehicle so Sr Daniela and other Sisters can visit parishioners scattered in distant regions and offer them catechesis, prayers, advice and a chance to talk.

“They are very glad to see us,” said Sr Daniela. “When we give them books and rosaries, they are overjoyed.”

Her courage and faith have inspired the small community of Sisters of whom she is superior, including novice Sisters Komal and Rukhsana. 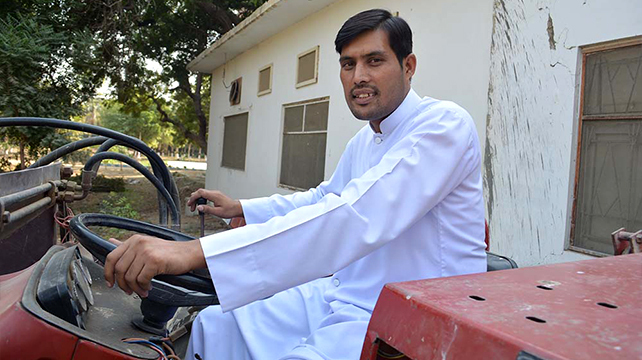 Like his biblical namesake, Samson the seminarian is a man of great strength and many parts.

At Christ the King Seminary, Karachi, he farms the lands, maintains the machinery and grows crops as well as keeping up his studies for ordination to the priesthood.

But at 29, his biggest challenge lies in the future.

He said: “I want to go out to the people furthest from the Church and in the most difficult situations.”

After ordination, Samson will go to the mountainous region of Quetta where the Taliban frequently threaten isolated Christian communities.

“They snatch or kill you.

“But the people are surviving so why can’t I?”

He has been on placement in the region in mountains up to 13,000 feet high.

“I was very impressed by the people I met. They feel this religious sense that they want a priest among them and they are calling me back to serve them.”

“There is just one problem,” Samson added. “Almost everybody over there seems to like cricket but I prefer football.”

Aid to the Church in Need is sponsoring the training of Samson and 35 other seminarians at Christ the King, Karachi, funding everything from books for their library and seminary lecturers to an electricity generator  and a well providing fresh water. 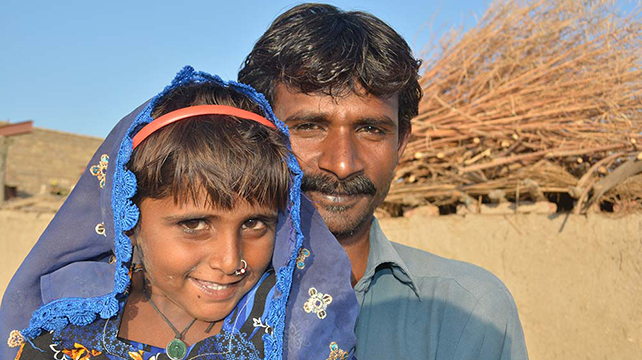 Persecution and faith in the future

Four-year-old Divia – held by her proud father, Kamijee – wears a medal of devotion to the Virgin Mary, a precious symbol of faith.

But it is a faith that exists under the shadow of persecution in Pakistan, a country struggling with extremism.

Christians number just three million in a Muslim country of more than 180 million where intolerance is fuelled by illiteracy of up to 70 percent.

An Aid to the Church in Need team visited Pakistan to find out what more we can do to help.

We visited Lahore, where bomb blasts against Christians killed 17 and injured nearly 80 others.

Many more would have died that Sunday morning but for Akash Bashir, 20, who was killed preventing a suicide bomber from entering his church.

Inside, you can read my interview with his grieving parents.

Pakistan is a land of martyrs and a place where Christians and others live in fear of being accused of blasphemy.

Prayers are urgently needed for mother-of-five Asia Bibi, who was put on death row for alleged disrespect to the Prophet Mohammed, a crime she did not commit.

As we travelled in Pakistan we saw plenty of evidence of ACN’s work in action: Christians rescued from persecution, children given catechesis and education, Sisters trained and active in schools and hospitals as well as new churches built for expanding congregations.

There is so much more to do – so many more people to help – seminarians coming forward for training, catechists wanting to reach out to new communities and Christian women waiting to learn basic skills to overcome oppression and intolerance.