Discrimination, injustice, assault, kidnap, forced conversion, torture and death are realities for Christians in the Middle East – and the situation is getting worse.Christians across the Middle East are in desperate need after years of persecution from Daesh (ISIS). 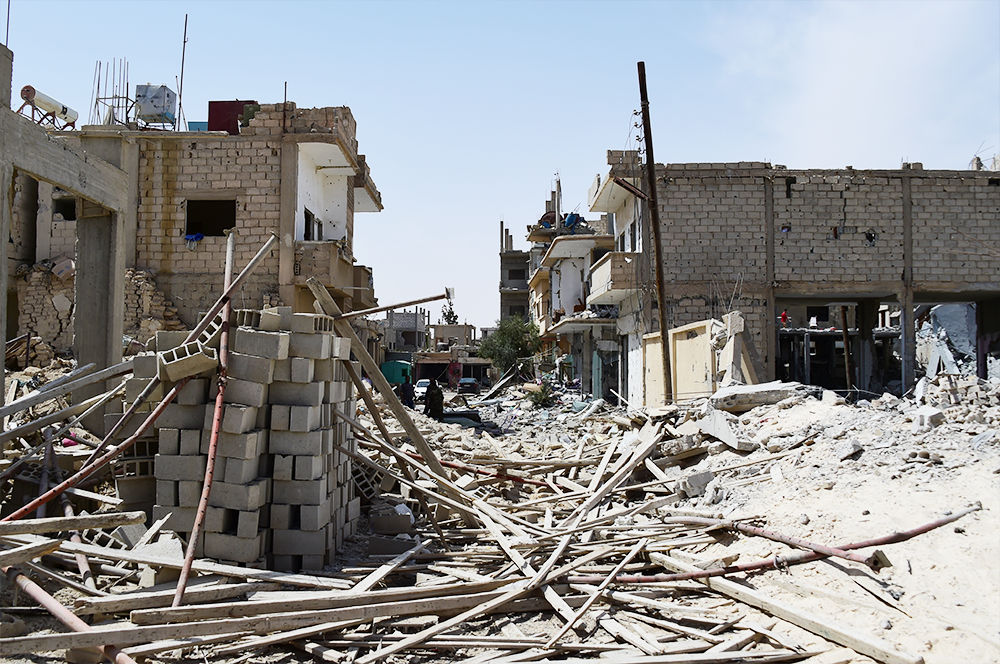 ACN is prioritising pastoral help and emergency aid for displaced and refugee families in the Middle East, as their needs are growing daily. With hundreds of thousands refugeesand displaced Christians, they turn to the Church for shelter and aid.

OUR WORK IN THE MIDDLE EAST 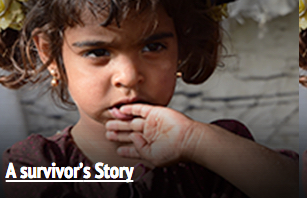 A young woman tells her story..

I am from Maaloula in Syria. My lovely village has been destroyed and burned by Daesh and Al Nusra.

They told us that we had to leave Maaloula or they would kill us and the other Christians there – so we left everything behind and we ran away.

My family’s loss is less than others’ who lost everything and now have nothing to live on. My family, like a lot of other Christian families from Maaloula, is now safe, but life is very hard. We ask Christians in the West to pray for us and to help us to live. Even a small thing from you will  make a big difference to us – it will help us to live.

I am going back to Syria. All of my family are still there and we all have faith that one day it will be better. Syria is our home.

My dream is to let the world hear my voice so that I can help this little place. People in Maaloula need help – many need medication because of what we have suffered.

Your gift – no matter how large or small – will bring so much comfort to those in the greatest need.  If you are able to give a regular gift of any amount please do so, as it will help us make more promises of love to persecuted Christians. 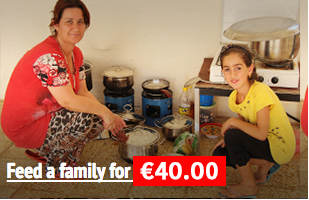 You can feed an Iraqi family for one whole month for only €40.00.

We need your help to provide each family with at least one food parcel per month. Aid to the Church in Need is supporting 60,000 Iraqi refugees and displaced people with food parcels and accommodation.

Your gift – no matter how large or small – will bring so much comfort to those in the greatest need.  If you are able to give a regular gift of any amount please do so, as it will help us make more promises of love to persecuted Christians. 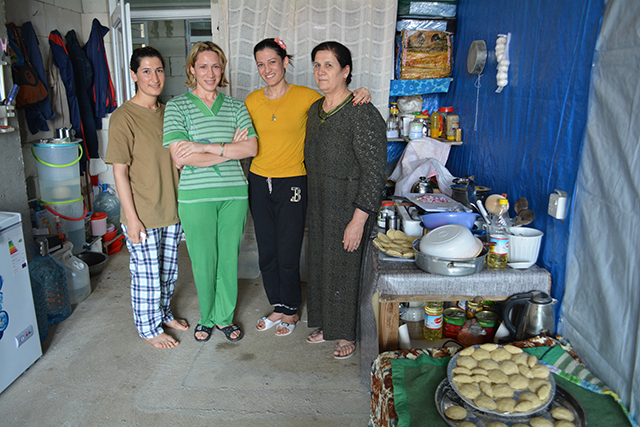 Don’t let them go without food and shelter

More than 60,000 men, women and children who escaped Islamic militants Daesh (ISIS) in Iraq are once again turning to Aid to the Church in Need, desperate for food and a roof over their heads.

A displaced family in their temporary home in Erbil

For more than two years now, these families have relied on you for their daily needs ever since they fled their ancient Christian heartlands in Mosul city and the neighbouring Nineveh Plains.

But, with no breakthrough yet in the struggle to claim back their towns and villages, they still need your support in their places of temporary sanctuary in Kurdish northern Iraq.

With many organisations unable to keep up the provision of aid, ACN is the only charity consistently providing food packages for the displaced people.

ACN project partner Archbishop Bashar Warda of Erbil in Kurdistan told us he felt ashamed to appeal again for help when ACN benefactors have already been so generous, but said he had no option but to do so because of the urgency of the situation.

Archbishop Warda told ACN: “With the continued failure of any meaningful government assistance, your help is essentially now all that stands between us and the end of any food aid whatsoever for the displaced families.”

ACN is also appealing for your support to provide shelter for 10,000 displaced Christians who urgently need rent money for accommodation in Kurdistan.

ACN is working with Archbishop Warda to fund 641 rented homes in and around Erbil. Each home is big enough to house three families. ACN Middle East projects coordinator, Fr Andrew Halemba said: “Without this assistance, all families would live in tents and caravans.” 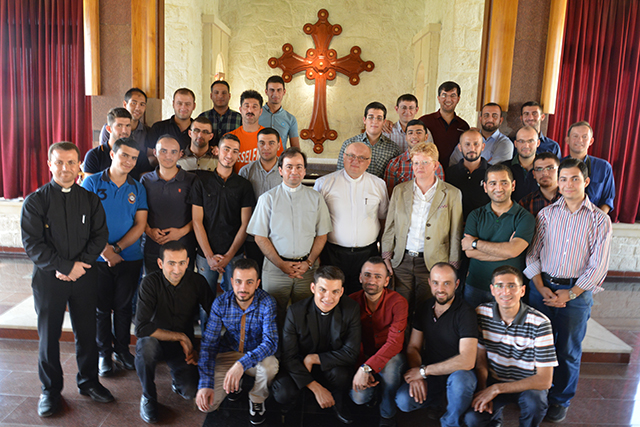 An ordination in a refugee camp in Erbil, northern Iraq has given hope to displaced Christians – and more are planned.

Four young seminarians, who fled Qaraqosh on Iraq’s Nineveh Plains when Daesh seized the city in August 2014, were ordained in March 2016.

Qaraqosh’s St Ephraim’s Seminary is now under the control of the extremists, so the seminarians finished their studies in Lebanon.

Syriac Catholic Archbishop Boutrous Moshe told ACN: “Such celebrations give the people hope – despite the situation we live in, we can continue to live our Faith”.

Archbishop Moshe of Mosul – another city being held by Daesh – ordained the young men with concelebrants from other Catholic Churches. Bishops from Orthodox Churches also took part in the ceremony.

ACN is committed to supporting the training of seminarians in Iraq, Syria and across the Middle East – providing Mass stipends for priests in the region.

Telling ACN that First Holy Communions were also being carried out, Archbishop Moshe said: “Life goes on as usual despite displacement – and another ordination is planned for late summer 2016.”

• Please remember in your prayers those who offer their lives as priests for the glory of God and the service of their people, especially those in greatest need. 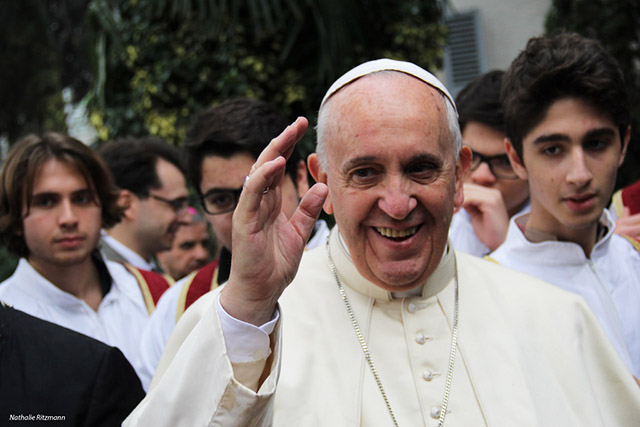 Lord Jesus Christ, you have taught us to be merciful like the heavenly Father, and have told us that whoever sees you sees Him.

Show us your face and we will be saved. You are the visible face of the invisible Father, of the God who manifests his power above all by forgiveness and mercy: let the Church be your visible face in the world, its Lord risen and gloriï¬ ed.

Send your Spirit and consecrate every one of us with its anointing, so that the Jubilee of Mercy may be a year of grace from the Lord, and your Church, with renewed enthusiasm, may bring good news to the poor, proclaim liberty to captives and the oppressed, and restore sight to the blind.

We ask this through the intercession of Mary, Mother of Mercy, you who live and reign with the Father and the Holy Spirit for ever and ever. Amen.

Extract from Pope Francis’ Prayer for Jubilee Year of Mercy