World’s worst place to be a Christian?

An Aid to the Church in Need staff member recently returning from the country called it “the North Korea of Africa”. As in North Korea, Eritrea’s Christians are imprisoned just because of what they believe and face harsh treatments while locked up – including torture. Many Christians have been jailed without trial or even formal charges. Sometimes they are arrested on the pretext of endangering national security. Up to 3,000 Eritreans are still in prison for religious reasons, two thirds of them are Christians.

Not only are Christians unjustly imprisoned in inhuman conditions but churches are subject to constant pressure and surveillance. The Eritrean Orthodox Church has been crushed in to submission. After its head Patriarch Abune Antonios was put under house arrest in 2007, for refusing to excommunicate 3,000 members who opposed the government, the state imposed a layman as leader of the Church to ensure its control. The Catholic Church has continued to maintain autonomy, resisting attempts to place it under state control – but the government still tries to subdue it.

Young priests and religious are being made to serve open-ended periods of military service – depleting the Church – and there have been attempts to confiscate Catholic schools and medical centres.

As it is illegal for Eritrean churches to accept overseas funds, we cannot reveal details about projects ACN is supporting without putting our partners in the country at risk. But we do highlight work we’ve been doing for Eritrean refugees in neighbouring countries. Because of its repressive regime no less than a third of Eritreans have fled the country. But your love is helping both those who have left and those in the country who remain faithful to Christ.

Eritrea: World’s most place to be Christian? 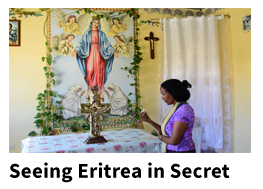 Recently a member of ACN staff visited Eritrea to see ACN projects – having been trying to get into the country for five years. We have been asked to keep their identity secret so that they can return to Eritrea.

“It was very risky going there, there was a real threat of being caught if they found out who we were. If they caught me, they could have put me in prison. The people who arranged for me would also be put in prison, accused of spying.

“As we left we had to be careful to hide the notes we had taken and any photos to be sure that we got out without attracting the suspicions of the authorities. “At one point we travelled to an area where we didn’t have a permit and we thought security officials were going to catch us but fortunately it was a false alarm and we were able to pass by without being caught.

“The Catholic Church is unique in that it has refused control by the state. The Eritrean Orthodox have never recovered after Patriarch Antonios was forced from office and a government-approved substitute was put in his place. “In spite the relatively small number of Catholics, the Church plays a vital role in education, medical dispensaries, kindergartens, orphanages, home-craft centres (carpentry, knitting, craft, etc.) and other social work.”

In 1995 it was made illegal for religions to accept funds from abroad and because of this we cannot give details about Church projects in the country. “Rarely if ever have I seen such spirituality among people who in the face of so much pain and hardship are willing to offer up their suffering for God. I sensed this even among boys as young as 10 whom I met when I visited a school.” 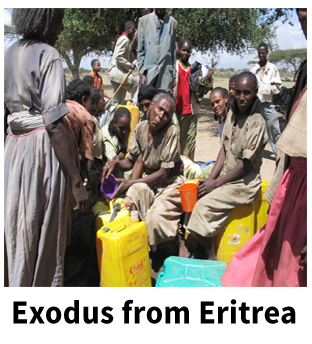 Islamist extremists in Libya routinely intercept refugees, killing any Christians they find. Two young brothers journeying to Europe from Eritrea described having to deny their Christian faith to survive. Haben, 19, said: “The men come round with Kalashnikov and they ask you what your faith is. If you are Christian they take you away and kill you. They cut off your head or shoot you. This is what they have done to hundreds of Christians.”

5,000 people leave Eritrea every month according to the UN, flooding into neighbouring South Sudan and Ethiopia. Among those fleeing are monks and priests from the Eritrean Orthodox Church. Aid to the Church in Need is backing Church-run projects to help those fleeing (see below and inside).

Most refugees end up in government-run camps, but many do not stay, complaining about the oppressive heat and the poor quantity of food, and leave for other countries – despite the dangers of trafficking and sexual exploitation. In the pastoral letter Where is your Brother? Eritrea’s bishops asked: “How much longer can this chaotic human exodus go on?… Given that so many of these stories end in tragedy, is there no other alternative solution?” 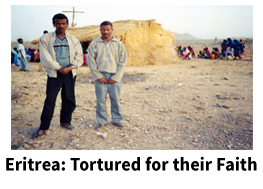 The “rules do not allow torture. However, there is no way to complain. To whom should you complain? You cannot oppose the authorities. The prison is isolated. There is no one there, so they can do whatever they want to do. “There is a saying in prison: If you scream, only the sea will hear you.” This was the testimony of a former inmate given to the UN.

Former prisoners have described appalling conditions, including being locked in metal shipping containers for long periods of time – leaving them at the mercy of the burning African sun when temperatures soar during the day.

Christians are particularly targeted, being tortured to try to get them to renounce their faith. They are not permitted to pray aloud or sing and all religious books are banned.

Around 2,000 Christians are in prison for their religious beliefs – many of them Evangelical Protestants. Prisoners endure a litany of horrors including forced labour, deprivation of food and water, appalling hygiene conditions and refusal of medical care.

Former inmates have also reported being forced to walk barefoot on thorns or sharp stones and being  hung from trees by their elbows and knees for hours on end. As they continue to endure these terrible conditions please keep them in your prayers.