PAKISTAN: BREAKING THE CHAINS OF SUFFERING

The case of Asia Bibi, the Christian woman from Pakistan placed on death row for blasphemy, shocked the world. For almost a decade she endured solitary confinement. The struggle to prove her innocence and regain her freedom united people in a movement of prayer and solidarity.

Besides Asia Bibi, there are more than 1,500 victims of Pakistan’s notorious blasphemy laws, according to latest reports – most of them unjustly accused and at risk of the death penalty or life imprisonment.

Thanks to you, ACN is able to stand shoulder-to-shoulder with victims of blasphemy, like Asia Bibi.

At a time of increasing violence and hostility towards minorities – especially Christians – so much more needs to be done for blasphemy victims. Their desire is to live out their faith without fear of violence and prejudice.

In this report, we pay tribute to the courage of Christians – young and old alike – who proclaim Christ at risk to their very lives. And we also show how – with your help – we can do so much more to break the chains of suffering and deliver much-needed aid to persecuted Christians. 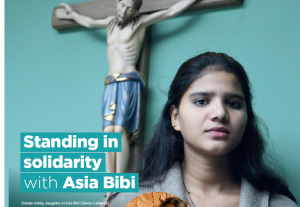 As Eisham Ashiq, the 18-year-old daughter of Asia Bibi, said to Aid to the Church in Need: “Thank you, so much, ACN, for all you are doing to help us. Please do not forget us.”  Her voice cracking and blinking away the tears, Eisham Ashiq, the 18-year-old daughter of Asia Bibi, described her mother’s suffering and thanked ACN benefactors for their prayers and support.  Eisham and her father, Ashiq Masih, told ACN how Asia Bibi came to be sentenced to death for allegedly blaspheming against the Muslim Prophet Mohammed.

One hot summer’s day, Asia, a Christian working among a mainly Muslim workforce, was scolded by fellow berrypickers for drinking water from a shared cup, an act which they claimed defiled the vessel. When Asia defended her actions, she was accused of blasphemy, charged and sentenced to death. After a long struggle to prove her innocence, on 31st October 2018 Asia Bibi was acquitted by the Pakistan Supreme Court.

In the meantime, ACN has continued to help Asia Bibi’s family who were forced to live in hiding because of mobs angered by her acquittal. The charity has appealed on the family’s behalf, both in the media and with politicians and government ministers, amid increasing calls for Asia Bibi and her family to be offered asylum.

How you can help people suffering like Asia Bibi

ACN is appealing for help to support thousands of people who – like Asia Bibi – live under the shadow of Pakistan’s notorious blasphemy laws. Articles 295B and 295C of Pakistan’s Penal Code impose the death penalty for blasphemy against the Muslim Prophet Mohammed and life imprisonment for desecration of the Qur’an.

With mob rule commonplace and corruption widespread, large numbers of people are accused of crimes they have not committed. Latest reports state that, since the blasphemy laws were first introduced in 1987, more than 1,530 people have been accused of blasphemy. Many of their families have also suffered. They are forced out of their homes and into hiding; they have lost their jobs and many risk being lynched.

Working with the Church’s National Commission for Justice and Peace (NCJP), ACN is providing vital assistance to blasphemy victims:

“Many thanks to those of you who support us with your prayers and gifts. Please continue to be generous and contribute towards this noble cause that is so important for the Christian community.”

Out of the ashes of persecution…

Christians in Lahore – who fled persecution and set up home in a different part of the city– need your help after they quickly discovered their new church was not big enough. In March 2013, 3,000 extremists descended on Lahore’s mainly Christian Joseph Colony, torching at least 100 homes, looting possessions and leaving a trail of destruction. Undeterred, the Joseph Colony Christians started up a new community in Jhugian Jhuhid, on the edge of the city.

With so many families pouring in, parish priest Fr George Daniel has turned to ACN for help to extend their church, called St Peter’s. Appealing for help, he wrote to us: “Almost every day, a Christian family is moving in and – with the utmost humility – I must inform you that our church is too small. We may soon run out of space.

“We have the land and an extension could easily be added – 50 feet in length.” Fr George added: “The church is so important to help us grow in faith in spite of all the hardships and sufferings we bear in daily life. Please be assured of our daily prayers for you and all those who help us.” 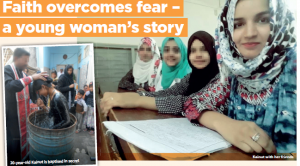 The story of Kainut, a brave 20-year-old woman who converted to Christianity, shows the price so many people in Pakistan pay simply for professing their faith in Our Lord Jesus Christ. Talking to ACN staff who met her on a project-assessment and fact-finding trip to Pakistan, Kainut described how she was moved by the example of her mother who had secretly continued to go to church in spite of being pressured to give up her faith.

Kainut told ACN how she started joining her mother at church – defying her father’s orders. She recalled how she longed to receive communion: “I cried. I told my mother that I wanted Holy Communion and that Jesus is my saviour.”

When Kainut was 14, her father died and her mother was forced to marry one of his cousins who forbade them from reading the Bible at home. But Kainut and her mother continued to go to Mass secretly. She said: “One day, I asked the priest to baptise me but he was afraid my relatives would kill us. I told him: ‘I am ready to die for Christ.” Now Kainut has entered medical school, hoping to become a doctor. But the family’s problems are not over yet. She explains: “We are facing threats to our lives and I don’t know what is going to happen to us in the future – but our hope is in Our Lord Jesus Christ.”

With persecution increasing in Pakistan, the country’s Christians are a priority for ACN help. Vital projects needing support include: