Bishop Massafra of Shkodër: “They were tortured to death. They always remained loyal to Christ and the church”

During the 40 years of communist dictatorship in Albania, praying, making the sign of the cross, wearing a cross around the neck or just believing were punishable by law. In 1967,the Balkan country officially proclaimed itself to be the first atheist country of the world. Churches, mosques and other places of worship were used as shopping centres, sports halls or theatres; the Cathedral of Shkodër, where 38 martyrs are to be beatified on 5 November, was used as a municipal sports arena. It is a very special place for Albanian Catholics, because it is where the first Holy Mass was celebrated after the fall of the dictatorship.

On the cathedral square dedicated to Saint Stephan, a monument has been erected in memory of the martyrs murdered over the course of history out of hatred for religion. Bishop Vicenz Prennushi, Bishop Frano Gjini, Bishop Jul Bonati, Don Alfons Tracki, Don Anton Muzaj, Ms María Tuci …  38 people in all. “Before they were tortured and executed by shooting, they all said, ‘Long live Christ the King, long live Albania. We forgive those who kill us’,” Bishop Massafra of Shkodër, chair of the Albanian Bishops’ Conference, said to the pontifical foundation Aid to the Church in Need (ACN).

Thirty-eight stories of hate and terror

María Tuci is the only woman among the Albanian martyrs. She attended the school of the Stigmatines, the Poor Sisters of Saint Francis in Shkodër, and later became a teacher. Her crime was reminding her students of the presence of Christ during the time of the dictatorship. She was arrested and tortured countless times. She was finally placed in a sack together with a cat. The torturers repeatedly hit the cat with a stick and María later died of the injuries that the terrified animal had inflicted upon her.

Lazer Shantoja, a well-read priest with a special interest in literature and art, was tortured so severely in the environs of Tirana that his own mother begged the murderers to shoot him to finally put an end to his suffering. The priest, writer and deeply patriotic Lek Sirdani was tortured and drowned in sewage.

Ndre Zadeja was the first of those who were executed by shooting and became the first martyr of the Albanian communist dictatorship. He died in Shkodër. In the interview with   Bishop Massafra said that all who were murdered in that city were forced to go along a particular route that ended at the cemetery wall. There they were “tortured, spat upon, and finally executed by shooting.” The route led them past the cathedral. “This was done on purpose. It was to remind them that they were suffering because of their love for Christ.” 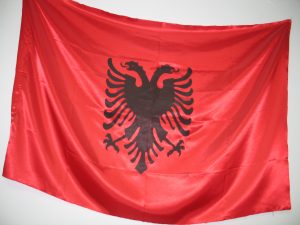 “They are the pride of Albania”

The land with the eagle coat of arms is filled with a pride that transcends borders. It becomes tangible in the thousands of Albanians who were forced to leave their country, especially in the 1990s, in order to have a chance in life. “The beatification ceremony is a joyous festival. Thousands of Albanians all over the world will be following it,” the chair of the national bishops’ conference explained. “This small, but great church has given the world church countless martyrs. These were people who had a great loyalty to Christ and the church.”

On the diocesan level, the beatification process of the 38 martyrs of the communist dictatorship began in November 2002 and ended in December 2010. Last April, Pope Francis signed the decree of beatification, ensuring that the 38 martyrs can be beatified on 5 November.

Despite five hundred years of occupation through the Ottoman Empire, countless raids and the reticence of the communist dictatorship, “Catholicism continued on in Albania. This is thanks to the martyr church,” Bishop Massafra said. Thousands of people were held in concentration camps or in prisons because they believed in God “or in Allah”, the Albanian bishop emphasised. After all, about 60% of the Albanian population was Muslim. Many died, but others survived the torture, as for example Sister Marije Kaleta and the priest Ernest Simoni, who will join the College of Cardinals on 19 November. When they gave testimony during the papal visit to Albania in September 2014, Pope Francis was visibly moved. “To listen to a martyr speak about his own martyrdom is powerful indeed!” the Pope said at the press conference held during the return flight from the Balkan country. Francis embraced the two survivors and emphasised that God had “held” them and helped them survive all the torture as well as the uncertainty whether they “would be shot dead or not.” These martyrs played a very important role in the concentration camps and in the prisons because they were the “secret consolers of the other prisoners,” Bishop Massafra explained. They could secretly celebrate Holy Mass and distribute communion, as Ernest Simoni described in his speech before Pope Francis.

The church in need in Albania

Since the collapse of the dictatorship in 1991, the international pastoral charity Aid to the Church in Need has carried out more than 125 projects in Albania, including the building of churches, spiritual centres and a seminary for diocesan priests. Furthermore, it has distributed copies of Youcat, a catechism of the Catholic church that was written for young people. In addition, help is also being provided here and there, one example being a van that was bought for the Franciscans so that they can drive children from rural areas to catechesis. There is an enormous sign on the back of the van that reads, “Jesus lives”. The convent of Discalced Carmelites in Nënshat is also receiving support; this is another way in which aid is being given.

In the Land of the Eagles, the Catholic church is a great help to the population because aid is provided to everyone, irrespective of their religion. In Albania, 70% of the population is Muslim, 20% Orthodox Christian and 10% Catholic.