ZIMBABWE: A true treasure for the children of the Kalanga tribe

Most people have lifelong memories of their first child’s Bible – Adam and Eve in Paradise, Noah’s Ark, the birth of Jesus in the stable, the wedding feast in Cana, the miraculous multiplication of loaves– all these stories and images become imprinted on our hearts.

In order that as many children as possible throughout the world can also enjoy reading these stories, for the past 42 years we have been publishing our ACN Child’s Bible “God speaks to His Children”. To date it has been published in no fewer than 191 different languages and ACN has printed 51 million copies. 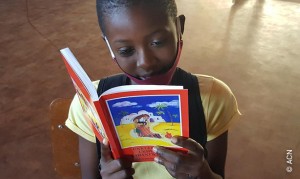 The goal is that children should be able to read the Word of God in the language in which they naturally pray and talk with their parents, brothers and sisters, and friends. In the western part of Zimbabwe in southern Africa, the children of the Kalanga tribe are eagerly awaiting their Child’s Bibles. For them the idea that God should speak to them in their own language is some thing quite new.

Ever  since the 19th century their tribe has been dominated by the Ndebele people, who were given preferential treatment by the colonial rulers and subsequent governments. Although their language is recognised as one of the official languages of the country and is used in 188 local schools, with the exception of a few school textbooks there are no other written books in their language – until now, that is. Having translated the Child’s Bible into Kalanga, with your help, we are planning to give 12,960 copies to the tribe’s children.

It is not only the little ones who love the Child’s Bible, many adults are fans of it as well. In regions where many people cannot read or write it helps promote basic literacy. As one young boy in Angola proudly informed his parish priest, “Father, my mummy is learning to read by using the Child’s Bible.” But this little red book is not just any old book, but stories from the Word of God. Many children bring it with them to Holy Mass, carrying it in their hands as they walk.

“For them it is as though some kind of divine protection emanates from this book, so they feel safeguarded as they go”, a missionary explained. All over the world, wide-eyed children ad-mire this colourfully illustrated “treasure” –in the Amazon rainforest and in the African savannah, in the city slums, the refugee camps and even in places where war is raging all around them. Year after year the little books are passed from hand to hand, read over and over, and even pressed to their hearts. For these children they are the proof that God loves them. And that He speaks to them in their own language.