WORLDWIDE: How a million children can change the world

On October 18 this year the international Catholic pastoral charity and pontifical foundation Aid to the Church in Need (ACN International) is once again inviting parishes, kindergartens, schools and families to join in the annual prayer initiative “A million children praying the Rosary”. It is a prayer campaign for peace and unity throughout the world, which, at the same time, encourages children and young people to seek help and support in God during difficult times, as the international president of ACN, Cardinal Mauro Piacenza explains. 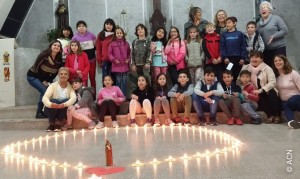 This year the initiative centres around the person of Saint Joseph, with quotations from the Apostolic Letter “Patris Corde” – (“With a Father’s Heart”) written by Pope Francis to mark the Year of Saint Joseph on the 150th anniversary of his proclamation as Patron of the Universal Church, a Jubilee Year which will conclude on December 8 this year. This year’s campaign will encourage children to pray “hand in hand with Our Lady and under the protection of Saint Joseph”. Cardinal Piacenza recalls that Saint Joseph, as Patron of the Universal Church, “is a great example for us of how God can turn all things to good through our prayer, our fidelity and our obedience to His Word”.

Although it was hoped that 2021 would see the end of the coronavirus restrictions, the consequences of the disease are still very severe in many places. Besides, this crisis is not the only threat facing the world. “Hunger, poverty, corruption, terrorism, the profanation of human life and the destruction of creation are affecting millions of people”, Cardinal Piacenza explains. In response, he emphasises the importance of prayer, and especially the prayer of children, in interceding for “God’s salvation for the world”.

Last year, the campaign “A million children praying the Rosary” beat all records, uniting together children from 136 different countries, including Syria, Iraq, Mexico, Armenia, Papua New Guinea, Nigeria and the Democratic Republic of the Congo, for example. Over 509,000 children registered on its ACN webpage alone.

The ACN webpage offers free materials for those praying in parishes, schools, children’s groups and families. As it does each year, the free information pack contains instructions on how to pray the Rosary, short meditations for children on the Mysteries of the Rosary, and an Act of Consecration to Our Lady for children.

This year the posters include Saint Joseph alongside Our Blessed Lady and an additional printed prayer to Saint Joseph which Pope Francis prays each day. The downloadable online information packs are available, together with pictures to colour,  in 26 different languages. You can find them at:  https://acninternational.org/millionchildrenpraying/material/

The origins of the prayer initiative “A million children praying the Rosary” date back to the year 2005 when a group of children were seen praying the Rosary at a local shrine in the Venezuelan capital Caracas, and some of the adults who witnessed the scene were reminded of the words of Padre Pio, who once said: “When a million children pray the Rosary, the world will change.” Since then, the campaign has spread rapidly and become a worldwide phenomenon.