When the crisis hit Lebanon, a Christian school just doubled down on its mission

For many Christians in Lebanon technical schools provide opportunities for future employment, and a stable environment for local families. Faced with one of the worst financial crises the world has ever seen, the Foyer de La Providence, in Sidon, has done everything it can to stay afloat and be true to its mission. It has succeeded, thanks to help from ACN benefactors. 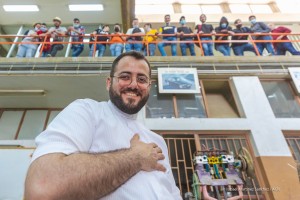 In the foreground, Father Hannna Kanaan with a group of Christian and Muslim students at the technical vocational school for young people run by the Melkite fathers of the Foyer de la Providence in Sidon (Lebanon).

When Fr. Hanna Kanaan, a member of the Catholic Melkite Salvatorian order, called a meeting with all the families who had their children enrolled in the Foyer de La Providence, in Sidon, Lebanon, parents feared the worst.

For decades the institution, which includes an orphanage, a school for children with special needs, a technical school, and a training centre for teachers from other parts of the country, has been the only one of its kind in southern Lebanon. But parents were well aware of the crushing financial crisis that has sunk the country’s economy over the past few years. How could they not be? Many of them had found themselves unable to meet their obligations, including the school fees.

“The cost of educating a disabled child is around 6,000 dollars a year. Since the beginning the Salvatorian order covered a third of the cost, but families still paid 4,000 dollars”, Fr. Hanna explains.

Fees are paid in Lebanese Pounds, however, which suffered a 20-fold devaluation due to the economic meltdown. “Those families who can still afford it do pay the tuition, but with the devaluation this now amounts to only 300 dollars, while our costs remain as high as before”, the priest explains. 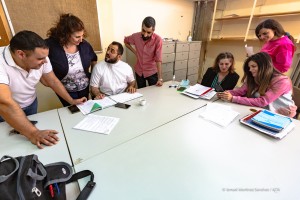 Father Hannna Kanaan with the administrative and teaching staff of the technical vocational school for young people, run by the Melkite fathers of the Foyer de la Providence in Sidon (Lebanon).

What the Salvatorians told the parents during the meeting, however, came as a surprise. “Yes, the situation was dire, we said, but we guaranteed that we were never going to close the school. Instead, we would continue to support the families. This gave them much peace of mind. No students have been kicked out for not being able to afford the fees.”

Teachers have also been protected. “Over these three years nobody has been fired for lack of funds. We have 82 teachers, and even though the number of students has declined by about 25%, they have all been kept on. In fact, we raised the salaries 40% and now pay for transportation for them to get to work. As for the specialists who look after the disabled children, we raised them 100% and include transportation as well”.

Of course, the money has to come from somewhere. The Salvatorians have reached out to all those who might be able to offer help, including Aid to the Church in Need (ACN). The pontifical charity approved the application and provides money to help cover teacher’s salaries and purchase fuel to keep the generator running. 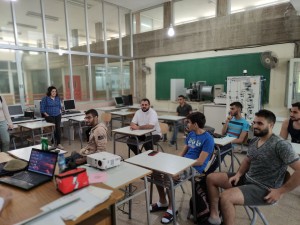 Young men attend an electronics class in the Foyer de La Providence Technical School, in Sidon, which provides education to many Christian families in the region. The crisis forced the school to find new ways to finance itself, to avoid closure. ACN has been supporting it.

The Foyer de la Providence is one of 19 Catholic technical schools that receive this aid in Lebanon, with some also obtaining help to buy materials for their workshops. In this case, however, the importance of the school goes beyond giving students the best opportunities to succeed in life. Sidon used to be a majority Christian area, but in recent years the city itself has almost been emptied of this community. Those who remain are mostly concentrated in villages in the surrounding countryside.

Many, like Fouad, who studies electrical engineering, would like to stay on, to preserve the Christian presence in the region which is mentioned in the Bible as having been visited by Jesus, but he feels the odds are stacked against him. Already he needs to work every morning and can only attend classes in the afternoon. “Things are going from bad to worse. We don’t know how much longer we can survive here”, he says. Were the school to close, there would be nothing holding him back.

The staff of the school is almost entirely Christian. Although at most of the 19 technical schools Christians are a majority, in the Foyer of the Providence, a majority are either Muslim or Druze.

This is not seen as a problem by Fr. Hanna, but rather as an opportunity. “Our centre is open to everybody, because one of our missions is to teach students to live together”, he explains.

Aid to the Church in Need is a key part of this mission, and its support for the technical school is crucial to provide the stability for many Christian families to remain in this part of Lebanon. ACN has been running projects in the country for decades, but since the financial crisis hit it has more than quadrupled its funding. Most recently the charity has launched a large-scale campaign for Catholic schools in Lebanon, to help offset the great economic crisis that has been bleeding the country’s social institutions dry, especially those linked to the Catholic Church.